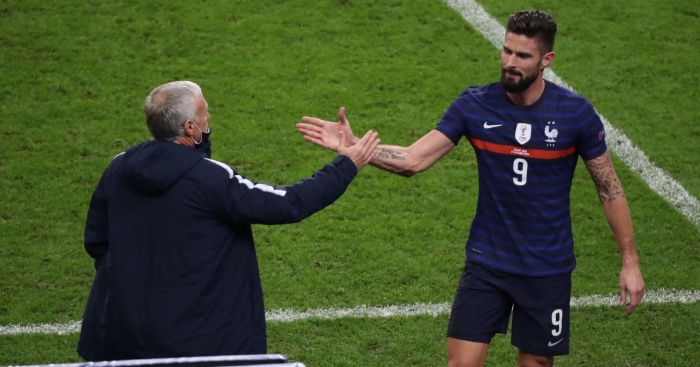 “He (Giroud) knows it, what he is going through now cannot continue. He will have to find a solution that is different to the one he is in now.”

It’s a bizarre position occupied by the Frenchman: leading the line for the world champions and yet not playing for his club. But despite previous warnings from Didier Deschamps – like this very similar one almost exactly a year ago – Olivier Giroud’s international selection has so far proven to be club-proof.

In the season before France’s World Cup triumph, Giroud started just seven league games; in the 18 months following, only a further nine. He’s barely missed an international in that time; Deschamps has continued to rely on him in spite of his club inertia.

But his worth – first to Arsenal, then to Chelsea – has never been as indistinct as it is now: he’s played just 33 minutes of Premier League football this season. Deschamps may not be bluffing this time.

Ironically, and probably wittingly, when Giroud did get a run in the team at the end of last season, his eight goals in ten starts actually reduced his chances of playing this season and have further strengthened calls for him to leave once again. Timo Werner would likely not have made his move to Stamford Bridge without the Champions League qualification Giroud played a huge part in securing.

He’s no fool. Despite citing his desire to “keep winning trophies” as his reason for extending his Chelsea contract, he will have realised his role would once again be a peripheral one – recent history suggests he’s happy without a first-choice guarantee. But even he must be concerned by just how extraneous his influence now is. Giroud’s decision to stay at Chelsea was justified last season, but this? Surely not.

And The Athletic claim Giroud is heeding his international manager’s advice and is looking to leave Chelsea in January. The question is, where?

Inter Milan were interested, but Romelu Lukaku represents too significant an obstacle to make that switch worthwhile. He fancies the MLS in the future, but that’s a move, if taken now, more likely to end his Euro 2020 hopes than brighten them.

Staying in the Premier League – where he has excelled for the last eight seasons – would be the smart move. But again, where?

By our reckoning there are just seven clubs that would significantly benefit from a better striking option: Fulham, West Brom, Burnley, Crystal Palace, Sheffield United, Brighton and – the team that realistically could and should sign him – Arsenal.

It’s just not working for Mikel Arteta offensively. With a lack of midfield creativity, there’s an over-reliance on attacking in transition, which theoretically allows Pierre-Emerick Aubameyang to drift centrally when the wing-backs overlap. It’s a method of fine margins: when it works, it’s beautiful; when it doesn’t, they look toothless.

Moving Aubameyang is often proposed as a way of improving Arsenal’s goal output, but playing him centrally won’t change a failing system. Alexandre Lacazette has been really poor, but dropping him and moving Aubameyang would make little difference to the way in which Arsenal play.

Giroud would give them an option to get up the pitch: to build attacks from further up the field rather than having to start from deep every single time. He offers a second option for through balls, not through his own piffling speed, but as a wall, off and past which Aubamayang, Willian and Nicolas Pepe can make secondary runs.

If Lacazette is scoring goals, then fine, but when he’s not, his worth to the team is negligible, whereas goals for Giroud are a bonus on top of his exemplary hold-up play, which would undoubtedly lead to a greater range of attacking options, while not restricting Arsenal’s favoured route.

It may be seen as a backwards step, quite literally – it’s hard to sell a move for a 34-year-old ex-player as part of the ‘process’ – but as a short-term solution to broaden very narrow attacking horizons, Giroud represents a low-risk, low-fee option that improves Arsenal’s chances of Champions League qualification and France’s hopes of the World Cup-European Championship double.