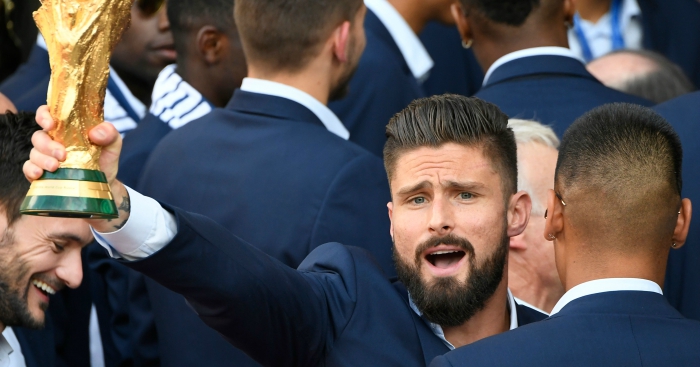 Olivier Giroud and his France team-mates want to replicate Les Bleus’ achievements of two decades ago when they followed a World Cup win with glory at the next European Championship.

The 31-year-old Chelsea striker failed to score in seven games at Russia 2018 but his muscular approach and clever link-up work were key factors in France’s success this summer.

The Nations League opener in Munich finished goalless, with France goalkeeper Alphonse Areola making three superb stops of his own when Germany pushed for a winner in the second half, but Giroud was satisfied with the point and is eyeing more international glory.

“We have a lot of talented young players and will carry on like this,” Giroud told reporters after the game.

The world champions were not at their best going forward on Thursday but they once again showed how hard they are to break down.

“Each team has its own style. We play with our quality, we know we are solid,” said Giroud.

“In the World Cup we were always ahead in every game, apart from nine minutes against Argentina. So we just had to keep the result. Sometimes you need to be clever.

“We didn’t score first here but once again we were very efficient at the back, the keeper did amazing on his first cap and Alphonse showed he is the future after Hugo (Lloris) retires. He will be the future of the national team.”

On France’s hopes of further glory at the Euros in two years’ time, when the tournament will be staged across 12 countries, Giroud said: “It’s nice to be at the top but the most difficult thing is to stay at the top.

“It is not easy to do that mentally but we are aware of that fact and we will try to do our best.

“We have played together for a long time now, since 2014. We have a settled squad. Yes, we have some young players but each player who comes into the team knows what he has to do.”

Giroud and co meet Holland in their second UEFA Nations League game on Sunday at the Stade de France.