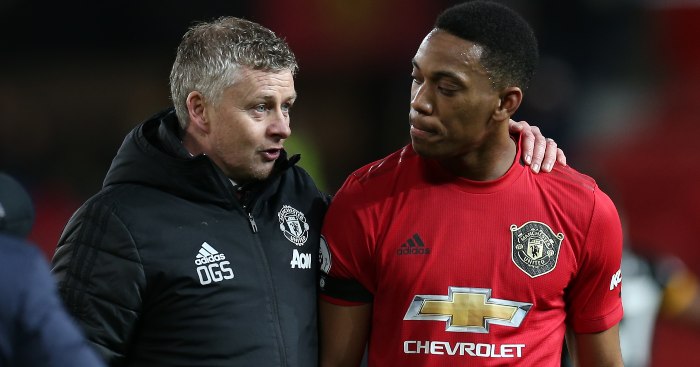 More reports emerged in the wake of another ineffective performance from Martial in Manchester United’s attack that the Frenchman enjoys special protection at Old Trafford. Namely from Joel Glazer, one of the owners currently overseeing United’s demise with careless abandon.

Glazer’s crush on Martial has caused consternation within the corridors of power at Old Trafford before. Jose Mourinho wanted rid of the attacker during his reign but Glazer apparently vetoed the proposal because Martial was his favourite player. At the end of a season in which Ole Gunnar Solskjaer had also seemingly become exasperated by Martial’s casual approach to his work, it was said that Glazer ‘considers him to be the club’s Pele’.

Maybe one of Pele’s little blue pills might arouse Martial because nothing else seems to be doing the trick. The 24-year-old currently has all he wanted from United: the No.9 shirt and a half-season run in the side as the leading centre-forward. Yet he still performs with the air of man who thinks he is doing everyone else a favour.

Martial divides United supporters like no other player not going by the name of Paul Pogba. Both provoke extreme responses and each has a loyal band of followers, with Glazer seemingly acting as fan club chairman for both.

Martial has always been able to reach for an excuse on the occasions he’s needed one. Not being understood by the manager is the primary one, with three bosses now having struggled to tease any consistency from the former Monaco forward. At what point, though, does Martial turn the spotlight back on himself, if indeed he is remotely inclined to take any personal responsibility for his own performances?

The signing of Odion Ighalo will continue to be mocked until the Nigerian scores a glut of goals but it highlights Solskjaer’s desperation to find a remedy for Martial. Or rather, an alternative. There is only so long even Solskjaer can accentuate the positives.

❌ Manchester United have failed to score in four of their five Premier League matches since the turn of the year – more than any other team pic.twitter.com/MHHVHusdMK

Ighalo, at least, is a No.9 in more than just the digit on his shirt. Throughout a globetrotting career so far, the 30-year-old has proved he can lead a line and play with his back to goal, which Martial is yet to demonstrate despite it being an essential quality on the centre-forward job spec. Ighalo could never have an Eric Cantona-esque effect, but United and Solskjaer will settle for the impact of Henrik Larsson, who like the manager was plucked from a Scandinavian league to help out the Red Devils.

That could help Martial figure out his own identity crisis. After four-and-a-half seasons, we don’t know yet which is his best position. Or even which can eke out the best response.

Marcus Rashford faced a similar dilemma and Solskjaer spent most of the first half of 2019 telling the England attacker that he is a centre-forward. A few barren months later, it became clear that Rashford is more effective coming off the left-hand side, which was fortunate since Martial had taken the centre-forward spot that Solskjaer had initially earmarked for Rashford.

But Martial appears little more suited to acting as the spearhead of any attack. Gary Neville has often spoken about Martial being ice cool, but at what point does ‘ice cool’ edge over into ‘really not arsed enough to care’?

It is dangerous to read too much into body language on the pitch – Ryan Giggs labelled him “a victim of his body language” – but we can see from his statistics that he needs to buck up his ideas if he is to have any chance of surviving as United’s centre-forward beyond this summer. Should he remain available for the rest of the season and maintain his present goalscoring rate, he is on course for 14 Premier League goals – the average of Romelu Lukaku’s two seasons at Old Trafford before he was shunted out for not being up to scratch in Solskjaer’s eyes.

That’s hardly in the Joelinton bracket of woeful returns but Martial is currently joint 16th with Burnley’s Chris Wood for goals per game this season. United expect and need so much more.

Martial may point to the appalling lack of creativity behind him, but as Bruno Fernandes appeared to recognise on his Manchester United debut, it’s difficult to break lines when the centre-forward won’t break a sweat.

Off the ball, regardless of whether United are in possession, Martial too often doesn’t offer enough. Defensively, he perhaps suffers as a result of United’s token press, where the proponents too regularly close down without the required intensity or in great enough numbers. In an attacking sense, Martial struggles to create space for himself, which is understandable given the massed ranks he is usually up against. But rarely does he create space for anyone else either.

@nqatpod – courtesy of @sampilger “How many teams break Wolves down? I am very happy with my boys.”

In their last 12 games, Wolves have been broken down in 10 of them, conceding 14 goals. The only 2 games they weren’t broken down were both against us

United look most threatening when Rashford and Martial play together, with each as happy as the other to interchange between central and left-sided positions. But Martial perhaps benefits from the space Rashford creates by taking up a greater portion of any defence’s focus. When Rashford is missing, Pereira and Dan James do not command the same attention.

Perhaps fatigue is taking its toll, as Solskjaer suggested on Saturday. Martial has started 15 of United’s last 17 games, but how are we to know that he is tired since his performances and demeanour have been entirely in keeping with what we have come to expect over the last four seasons?

Maybe Ighalo can take some of the burden from Martial, who like Rashford seems more comfortable coming from wide, facing the opposition goal. Regardless, Martial cannot expect endless patience from United, however smitten their part-owner may be.