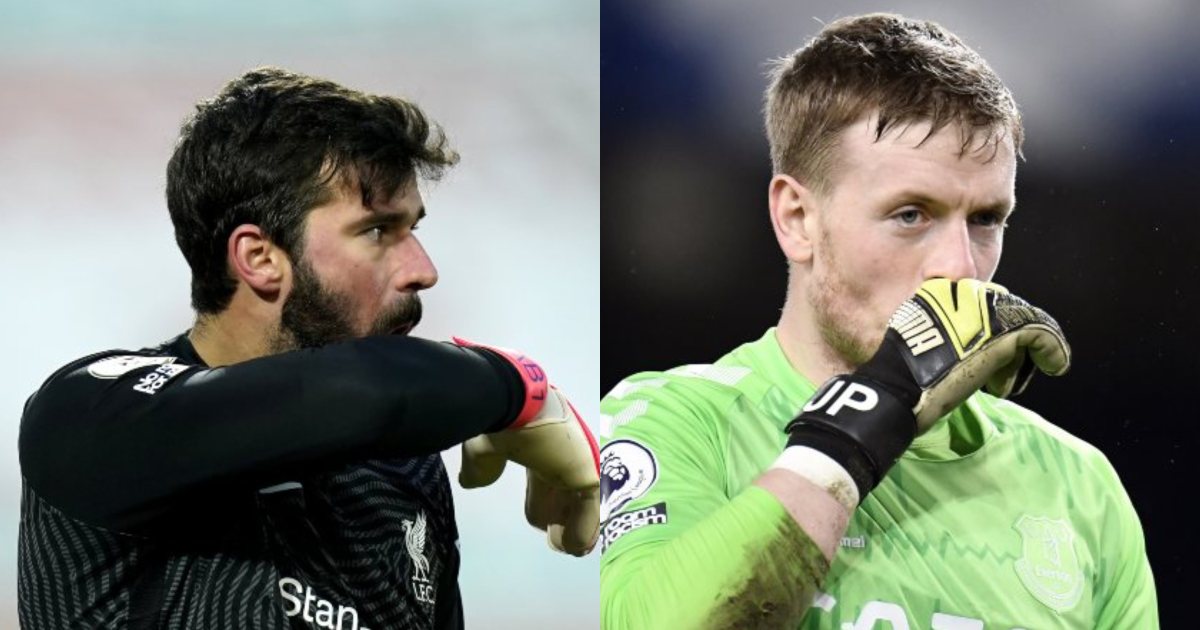 I had been mulling over a piece about this topic for quite some time. Then, on Wednesday night, after seeing Jordan Pickford’s frail attempt at keeping out Bernardo Silva’s strike, I knew the time had finally come.

Pickford’s feeble effort is just the latest in a catalogue of examples of the alarming decline in goalkeeping standards in our modern game. I don’t want to be seen as picking on Pick’; he’s not alone in this by any means. The current generation has produced a plethora of similarly weak-wristed custodians.

The Romans used to say ‘maiora premunt‘ – ‘greater things are pressing’. Well, it seems to me that the modern goalkeeper, perhaps swept up in the ever-evolving role, has been neglecting the essence of goalkeeping itself.

Goalkeeper, noun: a player whose job is to stop the ball from going into his or her own team’s goal.

You often hear people say, “oh, he’s a great shot-stopper”. Sounds complimentary, but it may also intimate that the player’s other skills aren’t as developed. No matter the implication, what I infer from that phrase, and what I feel has been lost, is that this is the key trait you want in a goalkeeper – someone who is going to make saves.

As Roy Keane has so eloquently put it: “It’s their job.”

I should take a moment and preface this analysis. A topic this wide-reaching has so many factors to consider, so please permit me if I focus only on a few players and teams. I genuinely believe the broader standard has dropped, so try to keep that in mind as I limit the discussion to some of the most commonly discoursed examples.

What the stats say
Looking at the save percentage statistics from the current and 2019/2020 Premier League seasons makes for some alarming reading.

Among goalkeepers who have participated in at least 45% of their team’s matches in both seasons, their combined save percentage average dropped from 71.4% to 70.1%. It should be noted that the save percentage, which is calculated by subtracting goals against from shots on target against, is not entirely representative of the ‘keeper’s performance – as shots on target may be stopped by defenders.

The average of goals against per 90 minutes among the same group of ‘keepers has also increased since last season, from 1.18 to 1.26 per 90 minutes.

The average clean sheet percentage follows a similar trend, dropping from 30.4% to 29.9%.

In truth, these clean sheet stats are of limited use to us. For all intents and purposes it is a goalkeeping stat, but it’s also a team stat. Seen in this context, it may shine a spotlight on the broader shortcomings associated with impacts of the the pandemic, but, that’s an entirely separate discussion for another day.

One thing that is for certain is that these stats don’t paint Sheffield United’s Aaron Ramsdale in a particularly flattering light. The 22 year-old stopper, who had a clean sheet percentage of 13.5% with relegated Bournemouth last season, has achieved a paltry 4.2% with the all-but-doomed Blades this term.

Admittedly, quite a number of the conclusions we can draw from our sample must be taken with a rather hefty pinch of salt. To a large extent a goalkeeper is only as good as the defence in front of him or her.

This is why you’ll see Ederson topping a lot of these stats, with no accounting for the blossoming partnerships of Stones, Dias and Laporte, who have undoubtedly had a profound impact on his save percentage this season.

However representative of the reality the stats are, when viewed through a wide lens, they bear the results of an overall decline in defending standards. This is further highlighted by a disturbing frequency of errors (by both ‘keepers and defending outfielders) that eventually lead to goals.

POFTB – Why are there so many mistakes?
Debates about the merits and risks of playing out from the back, or POFTB, will undoubtedly rage on, as they have done for years. The style, which has been championed by Pep Guardiola’s teams, is rooted firmly in the age-old concept of possession based football. As such, the philosophy will appeal to one manager, player or fan, but not to the next. In either case, we have become utterly obsessed with it.

The development and increasing adoption of the style stands as the most significant evolution in the goalkeeping role since the back-pass rule changed in 1992. That law, which sought to limit his/her ability to abuse the system with time-wasting shenanigans, was a reaction to negative conditions present in the game at the time.

One could also argue that the popularisation of the sweeper keeper role stands as another evolutionary milestone. But this role, which saw broader adoption thanks to Johan Cryuff, and then Guardiola, has been around since the 50s.

Goalkeepers today, however, have been dragged kicking and screaming into the future by the emergence of POFTB and other possession-based philosophies. To a degree, they are prisoners of it. There is an element of adapt or die to it, one that has already claimed the top-level career of Joe Hart, amongst others.

One wonders if there is a tangible correlation between a perceived decline in performance and this newly required skill-set that has been thrust upon the position. Has it diluted the other facets of goalkeeping? Does that extra time devoted to ball manipulation detract from time spent on positioning, catching, diving, agility, reactions, speed, decision-making, set-pieces and so on?

A few years ago I recall watching a goalkeeper training video conducted by the junior England teams coach Eric Steele. The main focuses of the lesson were ball control, supporting the play, passing and distribution. I was quite taken aback by how intense and lengthy these sessions seemed, enough to remember it years later anyway.

In a sport where a goalkeeper’s hands are an exclusive tool, we’ve become awfully preoccupied with what their feet are doing.

Ghosts of former selves
My father was a goalkeeper and an eager student of the goalkeeping greats. If you’d listen, he’d prattle on endlessly about the exploits of Schumacher, Zoff, Banks, Maier and, his personal muse, Ballon d’Or winner Lev Yashin (the only goalkeeper to achieve this honour).

One thing all of these ‘keepers had in common, aside from their outstanding talent, was longevity. Dino Zoff’s career spanned 22 years at the top of the game. Similarly, one-club man Sepp Maier racked up over 630 appearances for Bayern Munich and West Germany.

Sure, these legendary goalkeepers also made mistakes and suffered dips in form, as everyone does, but they rarely regressed to the extreme extent some modern goalkeepers seem to. There have been numerous Premier League goalkeepers on the path to greatness, who have strayed from it somewhere along the road.

The downfall of David de Gea has been a regular feature in the media over the past number of seasons, and unfortunately the stats confirm that he’s still on the decline. His save percentage of 63.1% this season is especially worrying, when compared with his healthy 73.6% return last season. His goals against per 90 minutes is also up on last term, from 0.95 to 1.30.

A man who was once a nailed-on future club legend is now a figure of constant speculation and rumour. While supporters of De Gea may point to their calamitous centre-back partnership as a major contributing factor to his regression, one only needs to look at the type of goal he’s been letting in to refute that claim.

Not too long ago we also witnessed a similar dip in performance levels from Real Madrid’s Iker Casillas. Of course, there were a multitude of reasons behind his demise at Real.

The purchase and emergence of Diego López, as well as the subsequent arrival of Keylor Navas. Then there were the reports of his inflated ego and of spats in the dressing room. Ultimately, it was his lacklustre performances during the 2014/2015 season that brought about the tragic end to his Real legacy.

The twilight of Casillas’ career does make one wonder whether De Gea will be viewed in a similar vein by the time his Old Trafford story comes to an end.

There are so many other examples of formerly great, but declining keepers over the years – Victor Valdés’ stint in England comes to mind. We’ve also seen home-grown talents like Joe Hart and Paul Robinson flirt with excellence, only to fade into obscurity.

This trend is continuing today.

Clash of the calamities
So, to this weekend’s Merseyside derby. Which one of these goalkeepers will have their fans screaming “he’s done it again!!!”.

The joy of the Merseyside derby, at least for neutrals, used to be predicting which side would end up with more players on the pitch. This time around I’m more eager to see which goalkeeper will blink first. If the recent past has taught us anything, it’s likely one of them will.

To make my position crystal clear, I don’t consider Pickford as remotely close to Alisson’s level. While the Liverpool man has been shaky of late, he has set such a high standard, having been such an integral part of their extended period of success.

Alisson is an all-rounder, usually consistent in his distribution, with excellent decision making and shot-stopping. Though his save statistics have dipped across all categories this season, for obvious reasons, there is little to no value in evaluating the stats of a Liverpool team that has been, to a man, a shadow of last season.

Pickford, on the other hand, well, let’s just politely say that his career thus far has not been a smooth ride, for us or him.

Neutrals and fans alike may incessantly question his vice-like grip on England’s no.1 shirt and most would argue they’re justified in doing so. But in an Everton shirt, he has made some truly outstanding gaffes. Some I fear have permanently, and irreversibly, eroded both his and our faith in his ability. I really feel for the guy, for what failing to live up to inflated expectations has done to his mental health.

His stats this season do show some minor improvement however, with his save percentage up a not-insubstantial 5.4 percentage points on last season.

Everton, who sit in 7th place going into the weekend, have nevertheless conceded the same number of goals as at this point last season (33), despite being four places higher in the table this campaign.

If I’m being totally honest, part of me hopes there are mistakes in this weekend’s derby. Not for any selfish reasons of validation or entertainment, but to further highlight that something fundamental has gone awry in the world of goalkeeping.

Whether through issues of coaching, unrealistic expectations, lack of ability or simply a period of adaptation to the new norm, at some point the machine broke down and stopped churning out reliable goalkeepers.

I ask myself, “If Dad was still with us, who would he look to for inspiration from the current crop?”. Neuer? Ter Stegen? Oblak? Ederson? A 43-year-old Buffon? In his day, without a thought, he could probably rattle off three or four English goalkeepers he would bet the house on.

The stats aside, any vested football fan knows deep down that there has been a noticeable drop in quality over the past decade. Some may say that more goals equals more entertainment, and I agree somewhat, though I don’t think any fan wants to see their team conceding weak goals.

On the question of the pandemic – yes, it has has coughed up plenty of out-of-character performances and freak results. They’re usually equated to the lack of crowd, a proper pre-season, the frequency of injuries or the inconsistencies in team selection.

Whether these issues are enough to warrant such a downturn in form is open to debate, but, in conducting this analysis I have reinforced the view I hold – that the evolution of the game we love has created issues that the modern goalkeeper is struggling to overcome.