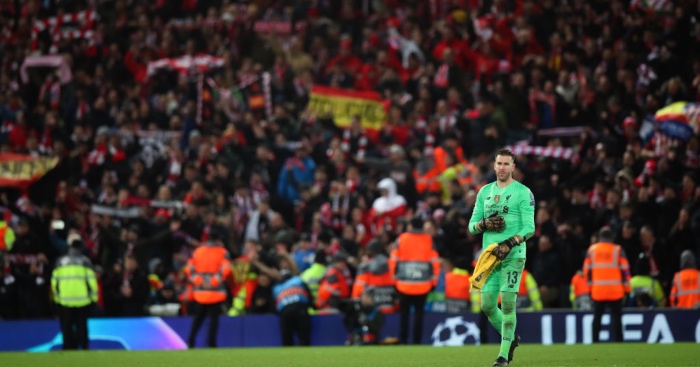 It’s been an interesting season for second and third-choice keepers with varying degrees of success. Back-up keepers have always been eyed with a large degree of suspicion. Some merely just benchwarm and collect their pay packet until needs must. Others seem fine for a while before they threaten to spoil your entire season…

1) Rob Green gets his kit ON
A few eyebrows were raised when Chelsea signed Rob Green on a free transfer in July 2018 as back-up to Thibaut Courtois and Willy Caballero.

By March 2019 the enthusiasm was beginning to wane when the former England keeper said: “It is a seven-day week. It is not like I am 21. I am 39 and out there getting peppered again. It is still a demanding role.”

He retired two months later – although only after being mocked for lifting the Europa League trophy in full gear a la John Terry. The former England keeper hadn’t even made an appearance for the Blues.

Even so, he boasted that his temporary team-mates had “enjoyed” him confronting Maurizio Sarri after the 6-0 demolition at the hands of Manchester City. Easy to do when your place isn’t on the line…

Then the Special One got all sentimental and decided Cudicini would play in the 2005 Carling Cup Final against Liverpool. “The promise I made to Carlo…was that he would play in the final. For the contribution he has made to the club in the past and in the present he deserves to play.”

Cudicini was sent off in the FA Cup defeat against Newcastle days after Jose’s guarantee and was therefore banned from taking up his 18-yard box at the Millennium Stadium. Eventually he moved on a free transfer to Tottenham, where he made a whopping 19 appearances in three years.

3) No Bravo for Claudio
Pep Guardiola brought the former Barcelona keeper to the Etihad in 2016 to implement his vision of sweeper-keeper distribution. However many times Pep waxed lyrical about his playmaker in goal, this also came with a hidden policy in the paperwork: ‘The most important thing for a keeper is to save the shots with the hands.’ Bravo palpably failed in this routine matter with a first-season save percentage in the mid 50s and was promptly dropped for Caballero.

When Ederson suffered a thigh injury in November, Bravo was recalled for his first Premier League match in 18 months against a rampant Liverpool. Pep sounded like he was trying to convince himself pre-match: “Claudio Bravo can do it. We won the Carabao Cup with him. He’s an exceptional keeper, a lot of games with his national team Chile.”

Bravo actually let in three goals from five on target at Anfield to bring back memories of the many non-saves in his debut season. The Chilean conceded another three against Wolves after Ederson had been sent off early, even though City were 2-0 up well into the second half. He went down in stages as Matt Doherty slotted in the dramatic winner.

4) Sir Alex gets on Tim’s goat
Sir Alex Ferguson decided to give “young” Tim Howard “a break mentally” in March 2004 after Old Trafford’s number one made an error that led to United’s elimination from the Champions League (and Jose’s Porto touchline charge).

Fergie said: “He’s been sensational and he’s going to be a top goalkeeper but I think this is the appropriate time to give Roy Carroll the next couple of games, or next three games, and see how he does.”

So followed a merry-go-round of mistakes from both as the jersey went back and forth.

“A goalkeeper is a very convenient scapegoat,” Howard raged. Carroll was expunged after ‘the goal that never was’ when he spilled a Pedro Mendes shot over the line against Tottenham in 2005.

5) Lehmann gives Almunia a kicking
Never one to be backward in coming forward, Jens Lehmann reacted badly when he was dropped by Arsene Wenger in 2007 for Manuel Almunia.

“Almunia has also said a lot in the past. He hasn’t won anything for us yet. Once he even said he was one of the best in Europe. But his performances have not made me have any serious concerns.”

True enough. When Almunia came on in the Champions League final against Barcelona in 2006 after the German was sent off, he let the equaliser in at the near post and the winner through his legs.

Lehmann: “Almunia dimmed my hopes. His body language after the equaliser was no longer positive. The keeper’s attitude spread to the players in front of him. The winning goal was only a matter of time.” pic.twitter.com/x4YYcTYZC0

Nevertheless, Lehmann left the Gunners at the end of the season but the Spaniard admitted: “Jens was very competitive on the pitch and in training, sometimes too much. But off the pitch he is a lovely person and our relationship ended well!”

6) Vamos Roberto
The 34-year-old ex-Espanyol keeper was Manuel Pellegrini’s original choice for the No. 1 role at West Ham before Lukasz Fabianski was signed from Swansea in 2018. When Fabianski tore a thigh muscle last September, the Chilean sanctioned Roberto’s move.

It soon became clear to anyone familiar with top-class football that the Spaniard was not good enough to lace his own boots. West Ham slid towards the bottom three after his errors against Newcastle, Sheffield United and Everton. Let’s leave it to Football London to describe the stand-in’s performance against Burnley in November:

‘Awful. Dismal. Diabolical. Set the tone when punching clear an early cross from the left. Pointlessly star-jumped in an attempt to save Ashley Barnes’s opener, very much to blame for Burnley’s second when throwing the ball to an unsuspecting Fabian Balbuena and the third was an embarrassment, punching a corner into his own net.’

At least it gave David Martin, third-choice and club legend Alvin’s son, a chance to step in for a first ever Premier League game as the Hammers beat Chelsea at Stamford Bridge. Feel-good moment of the season for nice guys.

7) Adrian’s pot pourri
Stepping into Alisson’s considerable boots after just 39 minutes of the Premier League season wasn’t easy, but Adrian had the cojones to cover Liverpool’s immediate need. He was drafted in over the summer after Simon Mignolet’s departure, and despite a howler against Southampton, the Reds have won all 11 Premier League games when he has featured. There was also the bonus of the Super Cup in Istanbul. As Jurgen Klopp said: “I don’t think he won much in his life, so I am really happy for him.”

Adrian’s true journeyman status has shone through in recent times, contributing to an FA Cup defeat at Stamford Bridge and, worse, a horror kick that led to a punch-drunk Atletico storming back to knock out the Champions League holders at Anfield. Then football shut down. Good timing to prevent a bigger, uglier backlash. And a good excuse to see Alisson’s superior distribution in throwing a ball through his skylight.

8) Vorm has no va va voom
Michel Vorm and Swansea always seemed like a natural fit. The Dutchman kept 13 clean sheets in 37 league appearances in his first season. After two more solid mid-table finishes he moved to Tottenham in 2014 to compete with Hugo Lloris for the number one shirt. As Julia Roberts once said: “Big mistake.”

There have been just 13 Premier League appearances and when he does appear, it normally doesn’t end well. Think Liverpool at Wembley last season where he was at fault for both goals or even the exit to Norwich in the FA Cup when he spilled Kenny McLean’s shot. With the emergence of Paulo Gazzaniga, the 36-year-old has gone further down the pecking order.

9) Chris Kirkland’s red alert
In October 2004, Jerzy ‘the Pole in the goal’ Dudek was dropped, giving Chris Kirkland a run of games at the promised land of Anfield.

Rafa Benitez opined: “If you change, then you need to be confident in your new goalkeeper. Normally, you would let a goalkeeper play four or five games at least.”

Kirkland’s window of opportunity did not last very long as he went on to commit howlers against Everton and Aston Villa as well as looking distinctly shaky against Olympiakos on that special ‘Gerraaaaard’ night at Anfield. Another injury prevented Benitez from the unpleasant task of dropping him officially. Like a teenage Scott Carson, who impressed in the Champions League quarter-final against Juventus as emergency third-choice, Kirkland was one of that brand of youthful talents who never quite did justice to their talents. See also: Robinson, Paul.

10) Willy Caballero, the fantastic pro
With Kepa’s well-documented issue of letting all sorts hit the back of his net, Frank Lampard has been quick to heap faint praise on back-up wily Willy. Before the league match at the King Power, Lamps said: “I trust Willy. He trains brilliantly. He is a great professional.”

The Argentinian then wet AWOL for Ben Chilwell’s strike, having chased the defender down and trotted back across his goal like the 38-year-old that he is. That’s no real criticism as such. It is just that when you have the world’s most expensive goalkeeper making the goal look twice as big, there’s a problem.