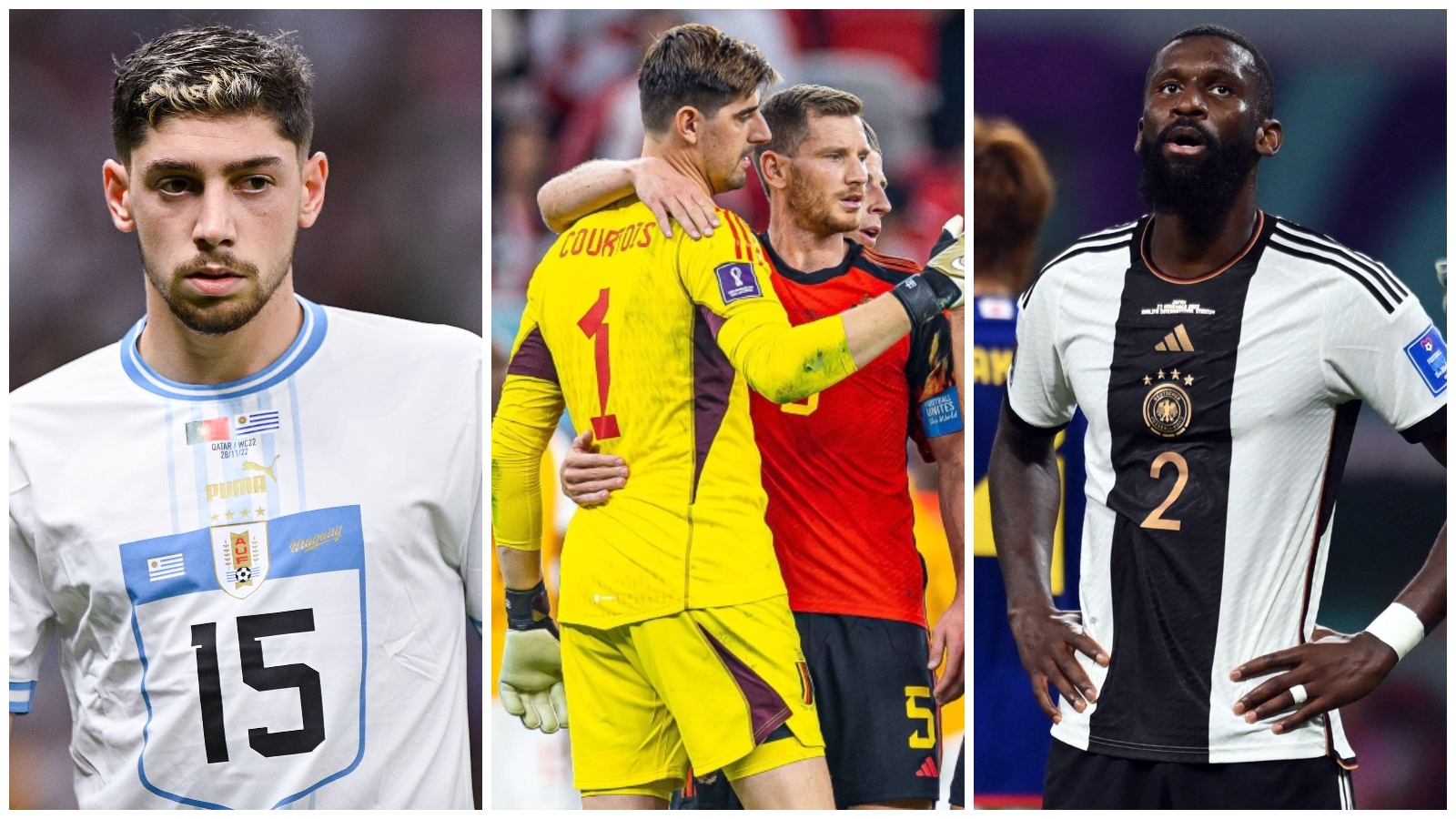 Unintentionally putting all three Real Madrid inclusions in the featured image, here is the strongest XI of players who have left the 2022 World Cup a lot earlier than they would have liked.

Goalkeeper: Thibaut Courtois (Belgium)
Arguably the best goalkeeper in the world, Courtois has been sent packing as he failed to add the World Cup to his long list of accolades.

Courtois was man of the match in Real Madrid’s Champions League final victory against Liverpool in May and carried his great form into the World Cup, saving an early Alphonso Davies penalty on matchday one as Belgium edged past Canada despite a very unconvincing performance.

The former Chelsea shot-stopper didn’t have a great time against Morocco, conceding the exact same goal twice; he will feel like he should have done better both times, although one was ruled out for offside.

After losing to the Moroccans, Belgium had to beat Croatia on Thursday but Romelu Lukaku did everything he could to ensure that didn’t happen. Alas, Courtois is on the plane back to Madrid.

Right-back: Joshua Kimmich (Germany)
Guys, chill out. I know Kimmich doesn’t play right-back these days, but just forget about that. He used to and still could if he really wanted to. Besides the best actual right-back to be eliminated was probably Thomas Meunier and I’m taking an out-of-position Kimmich over him.

Kimmich picked up caps 72, 73, and 74 in Qatar as his side lost to Japan, drew with Spain and beat Costa Rica. The 27-year-old played every single minute for Germany and actually started in right-back against Costa Rica with Niklas Sule slotting in at centre-back. Safe to say he is not in this defence alongside Kimmich, but another Germany player is…

Centre-back: Antonio Rudiger (Germany)
The second German, second former Chelsea player and second current Real Madrid player in this star-studded XI, Rudiger has done his distinctive run all the way to the airport after another bitterly disappointing World Cup for the 2014 champions.

Like Kimmich, Rudiger played every single minute for his side at the tournament as he is regarded as one of Hansi Flick’s most important players.

Centre-back: Jose Gimenez (Uruguay)
Gimenez joins Rudiger in our Madrid-themed defensive partnership after Uruguay crashed out of their group, finishing behind Portugal and South Korea.

Heavily fancied to go far in the tournament by many (of us, but importantly, not me), Uruguay finished third and are off home.

Gimenez is a solid defender who would form a pretty nasty partnership with Rudiger. You don’t have to have watched Gimenez a lot to know this. He plays for Atletico Madrid after all.

Left-back: Alphonso Davies (Canada)
The flying full-back starred for Canada at their first World Cup finals since 1986 and will do so again in four years’ time as his nation have qualified as co-hosts alongside Mexico and the United States.

As mentioned prior, Davies missed a penalty in the first game against Belgium before his side went on to lose their other two group games. The 22-year-old was able to create some history by scoring Canada’s first-ever goal in the tournament when he netted in the second minute against Croatia. Unfortunately, they ended up losing 4-1 and their elimination was confirmed.

Davies plays as a left-back for Bayern Munich and is well known for his amazing pace, but for his country he plays as an attacker, sometimes off the left, sometimes through the middle. But he is undoubtedly Canada’s best player.

Centre-midfield: Kevin De Bruyne (Belgium)
Belgium didn’t stand a chance of winning the World Cup because they are “too old”, proclaimed De Bruyne before he had kicked a ball in Qatar. They called him a mad man. But he was officially ahead of the curve.

Belgium were rubbish at the World Cup and De Bruyne didn’t really do much until the last game when he looked fairly decent.

The Red Devils’ golden generation is over and they won bugger all. Is Roberto Martinez to blame? Belgium lost to the eventual winners at the 2018 World Cup and at Euro 2020. Makes you think.

Centre-midfield: Thomas Partey (Ghana)
Moises Caicedo was in this team until Ghana lost to Uruguay on Friday, meaning Arsenal midfielder Partey is our No. 6 here at the expense of the Brighton youngster.

Partey’s time in north London has been greatly hindered by injuries, and it is clear to see how much the Gunners miss him when he is not available. The 29-year-old was thankfully fully fit for the Black Stars in Qatar as he played every single minute of their tournament campaign.

Cool, calm, composed on the ball, Partey helped his side beat South Korea on matchday two but couldn’t stop a fatal defeat against Uruguay. At least those pesky South Americans went out as well, right?

Centre-midfield: Christian Eriksen (Denmark)
Eighteen months on from that horrible day at the European Championships, Eriksen laced up for an international tournament, but it was not great for him or Denmark, who unexpectedly crashed out, finishing bottom of Group D behind Tunisia, Australia and France.

After their impressive qualifying campaign and semi-final berth at last year’s European Championships, many fancied Denmark as their dark horses. They were perhaps the ultimate dark horses. As were Uruguay, who also performed shoddily.

Ah well, back to club football for Eriksen, where it should be a happier atmosphere at *checks notes* Manchester United. Wait, what?

Right-winger: Federico Valverde (Uruguay)
Valverde went into the showpiece tournament as arguably the best player in the world, yet his highlight in Qatar was a celebration he made after making a tackle. Not ideal.

Still, he comfortably gets in this team, even shifting a natural right-sided player over to the left after Heung-min Son’s Korea went through – at Uruguay’s expense, actually.

It was yet another hectic, nail-biting end to a group after the crazy conclusion with the yellow cards in the Poland and Mexico games. This is what the World Cup is all about. Don’t even think about making it three-team groups in 2026, FIFA, you reprobates.

Striker: Dusan Vlahovic (Serbia)
I wonder if Karim Benzema actually counts here as he has been sent home, but due to an injury, not due to his team being sh*t. Anyway, the place here goes to Vlahovic after Serbia’s defeat to Switzerland and Cameroon’s shock win over Brazil saw them finish bottom of Group G.

Vlahovic joined Juventus for around £70m from Fiorentina in January after snubbing a move to Arsenal. He scored a fine goal against the Swiss to give his side the lead, but they quickly lost it before half-time. Nottingham Forest’s Remo Freuler scored the winning goal to send Serbia packing, much to the delight of Granit Xhaka and Xherdan Shaqiri, I’m sure…

Left-winger: Serge Gnabry (Germany)
Gnabry is the natural right-winger in question and the third German to make this team, with the likes of (left-winger) Leroy Sane, Manuel Neuer and Ilkay Gundogan missing out.

After two disappointing results, Gnabry scored and provided an assist in their impressive-but-too-late comeback win against Costa Rica. The former Arsenal youngster scored his 21st goal on his 39th cap for his country – an impressive record – but after Germany’s 2014 success, Gnabry missed their shocking title defence through injury and now experienced a group stage knockout. A great goal record, but some woeful international tournament experiences. Poor fella. Back to winning everything with Bayern Munich it is.