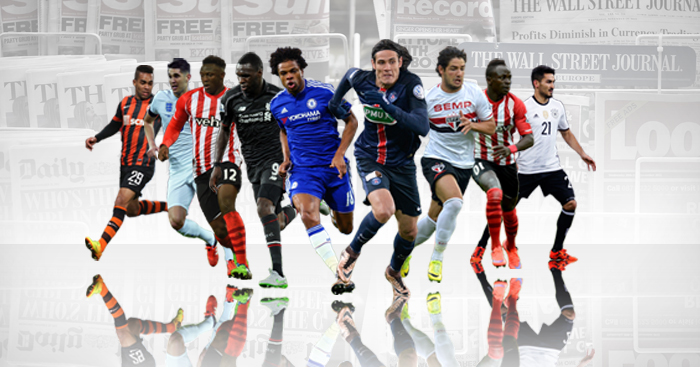 UNITED ‘FLATTER’ BALE
The Independent have called in the big guns for a whopping great EXCLUSIVE on Tuesday morning. It involves Manchester United, and it concerns Gareth Bale.

Messrs Herbert and Ogden report that Bale ‘gave serious consideration’ to a move to Old Trafford after United offered a world record £100million for his services last summer. We’ll wait for Football Leaks to come in with the breakdown of that fee.

Bale was persuaded to stay by then manager Rafael Benitez, but was also ‘flattered and intrigued’ by United’s interest. The ‘state of uncertainty’ at the club under Louis van Gaal is thought to have contributed to his decision to stay, as well as Real’s reluctance to sell him. So there you go.

TEIXEIRA TALK
Liverpool’s recent link with Alex Teixeira has threatened to make a rather underwhelming transfer window actually interesting. After an initial offer of £24.5million for the Shakhtar Donetsk attacking midfielder was lost in the ether, the Reds have returned with another bid.

According to the Daily Mail, Liverpool have now offered £28million for Teixeira, but again it has been rebuffed. Shakhtar value the Brazilian at £38million, and will hold out for more.

The Mail add that Chelsea have dropped out of the running for Teixeira’s signature, leaving Liverpool free to negotiate. Then again, Bayern Munich are apparently tracking the 26-year-old, so they ought to be quick.

Jurgen Klopp discussed the potential signing on Monday, but would Teixeira even solve Liverpool’s problems? He has scored 26 goals in 25 games this season, which is rather nice.

ANOTHER TOWNSEND UPDATE
‘Andros Townsend. Andros bloody Townsend. When will all this transfer b*llocks end, more like,’ we wrote in Monday’s gossip. Well, soon, according to The Guardian.

They report that while Tottenham and Newcastle are still negotiating over the fee, there has been a breakthrough. Spurs have previously been holding out for £14million, with Newcastle bidding only £10million, but Mauricio Pochettino has intervened to ‘request that the club accepts a lower bid’. It is thought that the offer is in the middle of the two valuations. So that’s around £12million for a 24-year-old who has scored three goals in 47 Premier League games over four seasons for Spurs.

Ed Aarons is the man with the claims in The Guardian, and he adds that Pochettino has been impressed with Townsend’s attitude since being frozen out of the team a couple of months ago. This, therefore, is a ‘goodwill gesture’. Not an opportunity to free a space in the squad, as well as bring in some money for a potential purchase then, Mauricio? Oh no.

BALOTELLI B*LLOCKS
That was quick. After reports that West Brom could be interested in Mario Balotelli, the Baggies have already denied that they are looking to loan the Italian striker from Liverpool.