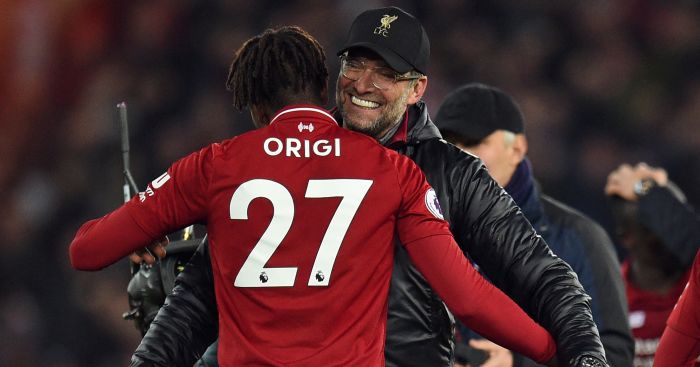 DENIS THE MENACE
Unai Emery kept his cards close to his chest on Saturday when asked about potential interest in Denis Suarez. He noted that Arsenal are “working” on a number of deals, without ever confirming that the Barcelona midfielder was one of them.

He went as far as to mention how he had worked with the former Manchester City youngster at Sevilla. It is that relationship that the Observer say Emery is eager to rekindle.

‘The two clubs have opened talks and there is a keenness on both sides to get the deal over the line this month,’ reports Fabrizio Romano.

FULHAM MOVE DIVOCK
You know what relegation-battling Fulham don’t need right now? A striker. Aleksandar Mitrovic has scored eight goals while leading the line for the Cottagers this season.

You know what relegation-battling Fulham are being linked with right now? A striker. Divock Origi has scored two goals in his last 603 Premier League minutes, yet will be parachuted in to rescue Claudio Ranieri and his new pals.

That is the claim from The Sun, who suggest Fulham will be ‘given money to strengthen’ a squad that needs defensive reinforcement. They will thus ‘throw big money’ at striker Origi, who has ‘other interested clubs on his trail’.

Jurgen Klopp would be relatively reluctant to lose the Belgian, but ‘he will be allowed to leave if the deal is right as his first-team chances are slim’. With the reported fee standing at £15m, that would probably do it.

Liverpool just can’t help but sell their fringe players for eight-figure sums, can they?

OMUR AT THE BAT
The Sun add that Origi’s departure ‘would leave them short up front’. So they will now go out and sign a midfielder from Trabzonspor.

This column can proudly state that it had never heard of Abdulkadir Omur before an extensive Google searching this morning. We can now tell you plenty about the 19-year-old, born in Trabzon, who has played 38 first-team games for his boyhood club and been capped 18 times at various international youth levels for Turkey.

The most intriguing bit of news concerning the 5ft 6ins teenager who made his senior debut in the Turkish Cup in January 2016, replacing Soner Aydoğdu in the 65th minute of a 4-1 victory, is that Liverpool are interested. Who wouldn’t be? He was called up by Turkey in March 2018 for a friendly against the Republic of Ireland but was an unused substitute. Ooft.

It will cost Liverpool £27m to sign the ‘wonderkid’. Do they not already have enough midfielders?

AND THE REST
Chelsea are set to make a £50m bid for Paris St Germain’s Uruguay striker Edinson Cavani, 31… Bournemouth will reject any offers from Chelsea this month for England striker Callum Wilson, 26… Inter Milan have held talks with Sampdoria over 22-year-old Danish defender Joachim Andersen, who has been linked with Tottenham… Porto’s 25-year-old midfielder Juan Quintero, who has spent the past three seasons on loan with clubs in France and his native Colombia, and is now in Argentina with River Plate, says his agent has met Manchester City officials to discuss a possible deal… West Ham are planning a bid to sign Inter Milan’s Italy midfielder Antonio Candreva, 31… Aston Villa are interested in signing Leicester City’s Austrian defender Christian Fuchs, 32, on loan until the end of the season… Real Madrid scouts have watched Porto’s 20-year-old Brazilian defender Eder Militao, who has also been linked with Manchester United… Everton are tracking Atalanta’s Italian defender Gianluca Mancini, 22, with a view to making a bid at the end of the season.