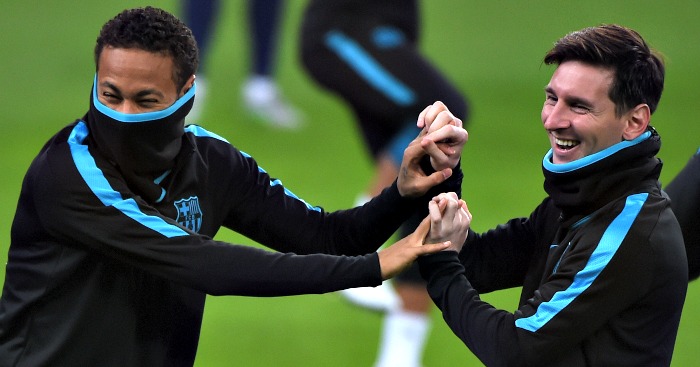 NEYMAR, MESSI, UNITED, CITY
This is wonderful stuff from The Sun, so just sit back and enjoy.

‘Lionel Messi and Neymar are at centre of a £1billion battle of Manchester United and City,’ screams the headline, not on the back page, but six pages within their edition on Wednesday. Why is such a massive story not given precedence over widely reported quotes from Claudio Ranieri on the futures of Riyad Mahrez and Jamie Vardy, Phil Taylor eyeing a darts title for his late mum, or an exclusive on how Jose Mourinho is morphing into Rafael Benitez? Weird.

Anyway, back to this groundbreaking news. According to The Sun’s Ken Lawrence, Barcelona forwards Neymar and Lionel Messi are wanted men by both Manchester clubs. The former’s head ‘has been turned’ by United’s offer, while Messi has ‘been blown away’ by the financial packages on offer.

‘Money is no object’ for either clubs, writes Lawrence, who adds how the latest Premier League TV contract, combined with giant sponsorship deals and season ticket sales, means both United and City will soon boast almost £1BILLION (ooo, look at their shiny bold font) a year in revenue. As a result, Messi and Neymar will be at the top of both of their transfer wish lists. They will be joined by ‘the likes of Cristiano Ronaldo, Gareth Bale, Thomas Muller and Paul Pogba, plus managers Pep Guardiola and Carlo Ancelotti’, according to Lawrence.

Ed Woodward and City’s Khaldoon El Mubarak have ‘done the maths’, which will take into account Neymar’s £165million buy-out clause, his £500,000-a-week salary, Messi’s buy-out clause of over £200million and his weekly wage of around £515,000.

This is a 5,681 word story, the crux of which is that United and City have a lot of money, and so could buy the world’s best players. This is not claimed as an exclusive, it is not new news, and it is buried within the sports section of the newspaper, as opposed to proudly adorning the back page.

Lawrence concludes with the following paragraph: ‘But there is much more to come from both clubs as they attempt to prove that Manchester really is mad for it.’

Excellent stuff all round.

GIFT OF THE GABBY
Onto The Times now, who report that Aston Villa ‘will consider offers’ for club captain and longest-serving player Gabby Agbonlahor in January.

Agbonlahor, who has made eight appearances for the bottom club so far this season, was pictured ‘outside a London nightclub’ in the aftermath of Villa’s 2-0 defeat to Arsenal at the weekend, so will presumably be granted the same treatment from the British press as team-mate Jack Grealish.

After falling out with manager Remi Garde, Agbonlahor ‘could be sold in January’, The Times add. It’s all well and good, but they seem to be missing one vital point: who in the shuddering f*** is going to want to sign Gabby Agbonlahor?

The 29-year-old, who is reportedly a striker, has not scored in the Premier League since his two goals against Sunderland back in March. Agbonlahor has scored 10 goals in his last 72 Premier League appearances, and has registered six shots this season – the same amount as Charlie Daniels and Gary Cahill, and fewer than Nyom and Steve Cook.

THE TOWNSEND IS NIGH
The gossip goes full circle now, finishing with The Sun. They report that Southampton want Andros Townsend.

Saints, who had a £10million bid rejected for Townsend last summer, are ready to ‘rescue’ him from ‘his Tottenham hell’. By ‘hell’, they presumably mean not being at all good enough, needlessly falling out with a fitness coach, and scoring three goals in 47 career Premier League appearances at the age of 24. Hellish.

Newcastle and Bournemouth will provide competition for Townsend’s signature, epitomising just how far his star has fallen in such a short space of time.

AND THE REST
Arsenal are poised to sign Inter Milan midfielder Marcelo Brozovic in the January transfer window…Chelsea have reportedly made an offer for Paris Saint-Germain midfielder Marco Verratti…Leicester forward Riyad Mahrez, 24, says he is staying at the Foxes until the end of the season despite being linked with Arsenal and Tottenham…Liverpool have agreed a £4.3m deal to sign Red Star Belgrade winger Marko Grujic…Watford are hopeful of signing Roma’s £15m-rated winger Juan Iturbe in January, most likely on loan with a view to a permanent move…Jurgen Klopp has the financial backing of Liverpool owners Fenway Sports Group to spend in January…Man United are plotting a quick return for striker James Wilson who is currently on loan with Championship high-fliers Brighton…Tottenham have made another check on Marseille striker Michy Batshuayi, who has scored 11 goals in 18 appearances this season, but a price tag of £30m could put them off a move.