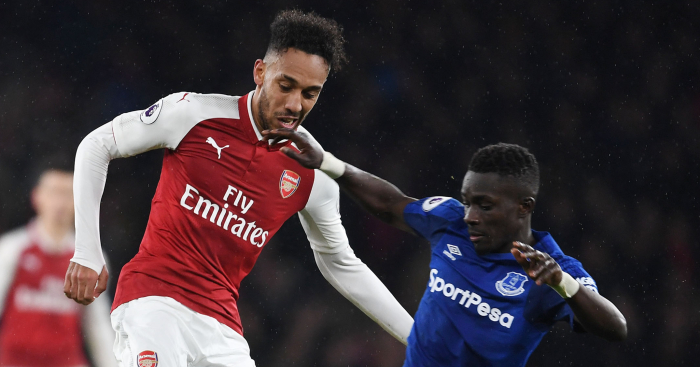 It remains to be seen just who those two “possibilities” are. Denis Suarez seems certain to be one, despite Barcelona blaming Arsenal for the apparent breakdown in negotiations.

The Independent saying Barca’s ‘stance’ over the midfielder ‘has softened’. BBC Sport’s David Ornstein reporting that a loan deal with a summer purchase option is ‘close’.

‘The Gunners remain in negotiations to sign a wide player,’ Ornstein adds. ‘Inter Milan’s Croatia international Ivan Perisic is among the options being pursued, with Belgium winger Yannick Carrasco of Chinese club Dalian Yifang another to have been linked.’

The Carrasco link is interesting, considering it has barely been mentioned. Everyone’s favourite Belgian journalist has a little insight:

Even those closely involved in both transfers say it’s difficult to predict the outcome: “Everything is possible.” #afc

…AND HAPPY AND GUEYE
‘Despite a number of injuries, Arsenal are not likely to bolster their defence,’ Ornstein also wrote. But they could reinforce their midfield. Sky Sports claim that Arsenal, Newcastle and West Ham ‘have asked’ about potentially bringing in Youri Tielemans on loan from Monaco, with Tottenham also interested. Yet it seems likely that Leicester will win that race, striking a straight swap deal with Adrien Silva headed the other way.

Arsenal’s other central midfield target is, somewhat surprisingly, Idrissa Gueye. Sky Sports say the Gunners and Manchester City ‘are interested’ in the Everton star, who reportedly handed in a transfer request on Tuesday.

Everton are adamant that Gueye ‘is not for sale’, and have rejected a £21.5m bid from PSG. The Daily Mail claim that the Toffees value the Senegal international at closer to £40m.

NKUNK-WHO?
Arsenal are also in the market for a sixth player. Not bad for a side with no money.

It was reported that the Gunners had identified the 21-year-old as an ideal squad player who can fill a number of positions, and had worked with Emery previously in Paris.

But José Pierre Fanfan has some bad news. He says that while “things could happen in the final 48 hours,” it “doesn’t look good.”

Arsenal will just have to make do with one or two of the other five players they want.

AND THE REST
Borussia Dortmund and Juventus are interested in signing Chelsea defender Andreas Christensen but the Blues want a £6m loan fee for the 22-year-old… Everton have rejected interest from AC Milan in striker Ademola Lookman but the Italian club could return with a formal offer for the 21-year-old… Southampton are in talks with Olympiakos over a deal for Norway defender Omar Elabdellaoui, 27… Benfica’s teenage winger Mesaque Dju, 19, is set to join West Ham on a free transfer… Real Madrid are targeting 21-year-old Eintracht Frankfurtstriker Luka Jovic – who is on loan from Benfica – as a long-term successor to France forward Karim Benzema… Paul Pogba’s brother Florentin, 28, is set to join Atlanta United in the MLS and resume his career under Frank de Boer.