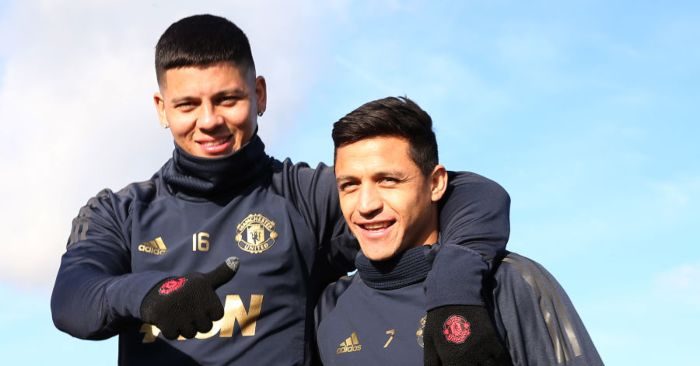 INSULT TO INJURIES
Time is ticking for Alexis Sanchez to find his way out of Old Trafford, but the situation is firmly out of his hands. Manchester United and Inter Milan continue to wrangle over paying a couple of the Chilean’s many annual millions, yet it all might be moot.

An injury to Anthony Martial could see Sanchez stay to provide cover up front. The Guardian say the results of a scan on the Frenchman’s thigh injury ‘may affect’ his teammate’s future, as Ole Gunnar Solskjaer would then ‘need’ him to stay.

Luke Shaw is dealing with his own sh*t too, as Jose Mourinho has been sticking his voodoo doll right in the hamstring. The left-back pulled up in the first half of the 2-1 defeat to Crystal Palace and The Times say ‘the initial prognosis does not look good’.

Shaw ‘expects’ to be out for a month. That would rule him out for at least three games, with the ‘worst-case scenario’ sidelining him for three more.

The blow ‘may have repercussions for Marcos Rojo,’ who ‘had hoped to leave’ but could now ‘stay to provide cover at left-back’ behind Ashley Young. What a bloody thought.

NEYMAR, BARCELONA, REAL MADRID, ETC
The Neymar saga has reached that crushingly dull stage, when nobody really has any new information and the same reports are being recycled day after day.

Marca are set on flogging this most deceased of odd-toed ungulate mammals, informing the world that Barcelona are still torn on their strategy, unable to decide whether to offer a loan with an obligation to buy, a big lump of cash, or a big lump of cash and a collection of players in part-exchange. They have had a meeting about this, though. Riiiiiiiiiight….

ALTHOUGH…
AS do at least have a bit of an interesting spin on this, claiming that PSG have told Madrid that any offer for Neymar must include Vinicius Jr moving to Paris.

That’s probably not going to happen…

CHRISTIAN BELIEF
Christian Eriksen doesn’t seem to be going anywhere either and we probably knew that too. The Mail report that with less than a week of the European transfer window left, the midfielder is nowhere near a move to any of the clubs he wanted to join at the beginning of the summer.

The Mail also reiterate that despite being offered a new contract worth somewhere in the region of £200,000 per-week, he has no interest in entering into negotiations with Spurs and, barring a last-minute offer from Real Madrid (which isn’t coming) he will look to leave the club on a free transfer in a year’s time.

MONREAL BACK TO SPAIN
Nacho Monreal might be leaving Arsenal this week. He’s out of contract at the end of the current season and there are no plans to offer him an extension – unsurprisingly, as he’s 33 now. But Mark Irwin at The Sun thinks he might be departing north London much sooner, with Real Sociedad reportedly interested in the full-back. They are prepared to offer £3m to take Monreal back to Spain.

Irwin also claims that Arsenal would be more than happy with that, which does seem a little strange. Kieran Tierney was signed over the summer, but he isn’t expected to recover from an operation for quite a few months. If Monreal were to depart in the coming days, it would leave Unai Emery very exposed in his position, with only Sead Kolasinac available at left-back.

AND THE REST
Free agent Wilfried Bony might be heading to Inter Milan… Javi Gracia’s heading for the sack at Watford… Tammy Abraham’s getting a new contract… Serge Aurier also wants to leave Spurs… Swansea will sell Andre Ayew to Sampdoria.