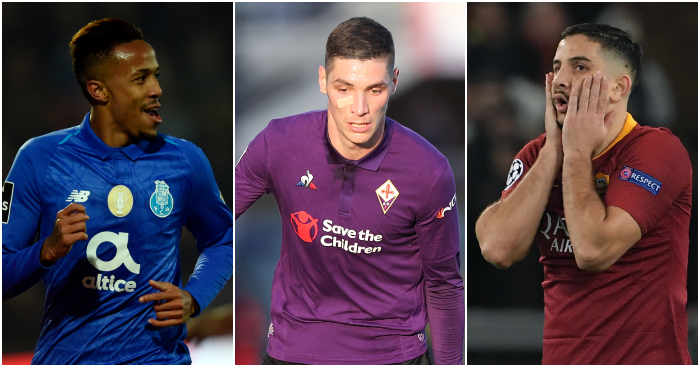 KOSTAS FORTUNE
Jose Mourinho is long gone from Manchester United, but his spirit lives on at Old Trafford. Because the club keeps being linked with centre-halves.

They do need one this January, albeit not quite as desperately as the Portuguese insisted. But who fits the bill for Ole Gunnar Solskjaer and his mates?

It could be Kostas Manolas, he of Roma and scoring against Barcelona fame. An Italian journalist claimed this weekend that United had opened talks to sign the player, who has an apparent £32m release clause. But Calciomercato have a spanner and they are not afraid to use it: the clause only becomes active in the summer, they claim.

They do confirm United ‘are in talks’ to sign the Greece international, but if they want him this month ‘they will have to pay more’ than the reported £32m fee. It all depends on whether they can wait until the summer.

WHAT AN EDER
If not, perhaps Nikola Milenkovic could be of interest. He has also impressed in Serie A with Fiorentina, and Mourinho failed to get a £40m move sanctioned.

It would therefore be hilarious if Solskjaer could push it through for the £45m fee reported by The Sun. They say Ed Woodward ‘is willing to invest for the right deals’, and will discuss matters with Solskjaer in the coming days. Milenkovic, 21, ‘remains firmly in their plans if a mid-season deal can be struck for the Serbia international’.

Perhaps talks will also be held over Eder Militao, who was named as Mourinho’s ‘ideal’ centre-half back in November. Now we are being told by The Sun that Mourinho ‘was not interested’ in the Porto right-back. Hold on…

The actual story is that Real Madrid also want the 20-year-old for his reported £42.5m release clause. Eder was capped by Brazil in September so should not struggle to get a work-permit, while he ‘has been likened to Portugal’s Pepe for his physicality and pace and could become a centre-back later in his career.’

DENIS HOPPER
It seemed pretty nailed on that Arsenal were signing Denis Suarez this month, yet John Cross now says Barcelona ‘are battling to stop’ him leaving.

The Daily Mirror’s chief football writer says Barca ‘are adamant they do not want to lose him just yet’, despite Arsenal now being quite far along in negotiations over an initial loan deal that can be made permanent in the summer.

‘It could be just posturing but Barcelona are currently playing hardball,’ adds Cross, who also refers to a potential ‘buy-out clause’. Can a club really ‘play hardball’ in that situation?

AND THE REST
Bayern Munich hope offering Chelsea’s Callum Hudson-Odoi the number 10 shirt currently worn by Arjen Robben will help seal a £30m move for the 18-year-old forward… Wolves have finalised a deal with Tammy Abraham’s parent club Chelsea to take him on loan until the end of the season. The England international, 21, is set to decide on Monday whether to end his loan at Aston Villa and switch to Molineux… Manchester City manager Pep Guardiola says it is “impossible” that 18-year-old English winger Phil Foden will leave on loan… Arsenal are not expected to make an improved offer for Roma’s £45m-rated Cengiz Under, having failed with an initial £35m bid for the 21-year-old Turkey winger… Crystal Palace boss Roy Hodgson says he has never heard of Sunderland striker Josh Maja – despite the Eagles being linked with a January move for the 20-year-old Englishman… Aston Villa are preparing a move for Brentford’s 22-year-old French striker Neal Maupay.