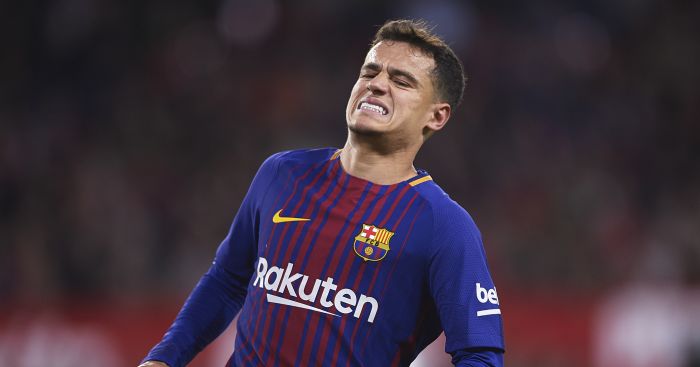 PSG GO BIG FOR COUTINHO
And when we say ‘big’, we mean ‘really big’. Like world-record big. According to Mundo Deportivo, PSG are willing to pay almost £240m for Brazilian Coutinho. But having sold Neymar to PSG, Barca are incredibly unlikely to allow their January recruit to head there too, even though they would make a tidy profit.

The theory is that both Neymar and Kylian Mbappe would be more likely to stay at PSG if they bought a world-class midfielder. Well, it’s one theory.

LIVERPOOL IN £12M CROATIA BID
The player in question is Dejan Lovren’s defensive partner Domagoj Vida, who only joined Besiktas on a free transfer in January. The price – according to Turkish outlet Aksam – is £12m, because Vida would be back-up rather than a replacement for either Virgil van Dijk and Dejan Lovren. Poor Ragnar Klavan.

Vida is 29 years old and has hit the headlines at this World Cup not just for celebrating victory over Russia by shouting ‘Glory to Ukraine!’. Playing for five years at Dynamo Kiev had clearly given him some nationalistic fervour.

WILSHERE ONE OF THREE HAMMERS THIS WEEK
Jack Wilshere is likely to be unveiled this week by West Ham as a free transfer from Arsenal, but that will not be the end of this week’s business, with two more coming through the door. They are Andriy Yarmolenko and Fabian Balbuena.

Winger Yarmolenko will arrive from Borussia Dortmund for £17.5m and Paraguayan centre-half Balbuena will arrive from Corinthians. It is expected that Balbuena’s arrival will signal the end of the Hammers’ interest in Alfie Mawson, with Balbuena and record signing Issy Diop forming their centre-half partnership.

AND THE REST
Arsenal are in talks with Lorient about signing of 19-year-old France Under-20 midfielder Matteo Guendouzi…Ajax boss Erik ten Hag has confirmed the club are interested in re-signing 28-year-old Manchester United and Netherlands defender Daley Blind…Everton and West Ham have joined the Gunners in the race to sign Sevilla and France midfielder Steven N’Zonzi…Arsenal’s Spanish left-back Nacho Monreal, 32, is a target for La Liga side Real Sociedad…New Derby manager Frank Lampard has come in with a last-minute bid for West Ham central defender Reece Burke with the 21-year-old Englishman set to move to Hull City,,,Middlesbrough boss Tony Pulis is keen to sign Burnley and Wales striker Sam Vokes,,,Nice midfielder Jean-Michael Seri has been spotted in London with Chelsea, Arsenal and Fulham all interested.