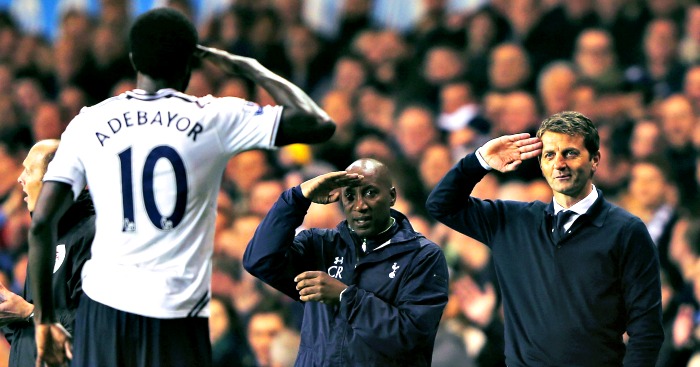 ADEBAYOR BACK TO SPURS. OH YES (OH NO)
Suppose you thought that silly season was now over, given that the transfer window has closed? Think on, brother.

That’s because Tuttomercatoweb have outdone even their normal standards of silliness by claiming that Tottenham are interested in re-signing Emmanuel Adebayor. Given that they only just finished paying off his last contract, it’s about as likely as Tim Sherwood conceding that, actually, foreign managers are generally far better than their English counterparts and thus deserve all the Premier League’s best jobs.

Honestly, there’s nothing else to say really. It’s just a massive crock of sh*te.

The Daily Mirror, among others, report that Sunderland and West Brom are both interested in the Mali international, but it’s probably not worth getting that excited. Sissoko might only be 31, but he was released by Chinese Super League club Shanghai Shenhua in February and is yet to find a new club.

CHELSEA EYE UP CACERES
Another free agent attracting plenty of reported interest is Martin Caceres, the 29-year-old central defender who has been without a club since being released by Juventus in June.

Antonio Conte knows Caceres from his time in Turin, but again it’s surely a worry that no club has picked up the Uruguayan before now. With Marcos Alonso and David Luiz arriving late on in the transfer window, do Chelsea not now have enough cover in defence?

Caceres has only started 41 league games in the last four seasons, too. He’s going to be rustier than a knock-off Raleigh Max left out in the rain.

GIBBS WANTS TO LEAVE ARSENAL
Strange one this, with The Sun claiming that Kieran Gibbs wants to leave Arsenal due to a lack of first-team action.

Strange not for the fact that Gibbs wants to leave, but that the left-back has only made the call a week after the transfer window closed. It’s not like Nacho Monreal has only just become first choice. You needed this move six months or a year ago.

Really, this is top ‘after the horse has bolted’ work from Gibbs. You’ve started seven league games since New Year’s Day 2015, fella.

AND THE REST
Jonny Evans will sign a new £75,000-a-week contract at West Brom after failing to secure a move to Arsenal… Everton are ready to offer Ross Barkley a new long-term contract… West Brom midfielder James Morrison wants to move to Celtic, after being frozen out of the first-team picture by Tony Pulis… Milan will offer goalkeeper Gianluigi Donnarumma a new contract to ward off Manchester United and Chelsea… Manchester City midfielder Yaya Toure, 33, will consider signing a pre-contract deal with another European club in January… Leicester manager Claudio Ranieri has approached Eduardo Macia to replace former head of recruitment Steve Walsh.