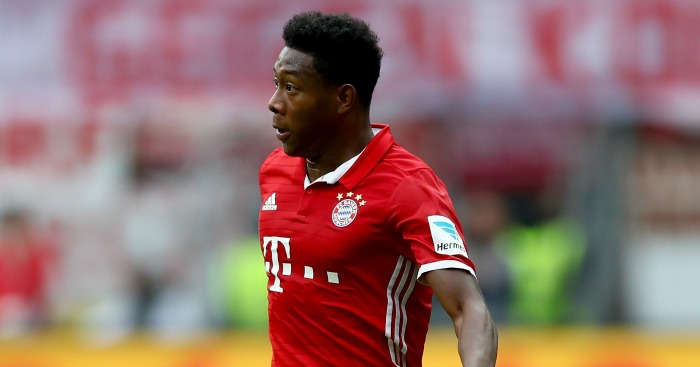 MANCHESTER CITY IN FOR ALABA
We’ll start with The Sun, and an exclusive by Phil Cadden. He reports that Manchester City have met David Alaba’s agent twice over the last two weeks to discuss a £40m move from Bayern Munich to Manchester.

Cadden writes that City don’t believe they can sign Alaba in January, but will push for a move in summer 2017. Pep Guardiola has decided that he needs to replace both of his full-backs, which is absolutely right. Are we finally going to see the end of Aleksandar Kolarov’s banterous brand of defending?

Finally, Cadden says that Manchester City are prepared to double Alaba’s £75,000-a-week wages. That seems a low salary for one of the best (and most versatile) defensive players in Europe.

BARCA WANT MAN UNITED TEENAGER
Gossip is extraordinarily thin on the ground on Tuesday, the result of a big match on Monday night taking up all of the column inches. Yet one line in the Daily Mail did stand out: Barcelona are trying to sign Manchester United teenager Angel Gomes.

Gomes is 16, a first-year scholar at United but very highly thought of. He’s captained England’s Under-16 and Under-17 sides and already played regularly for United’s Under-18 side.

“It’s ridiculous. I look at the kids and they’re miles better than I was at their age – technically,” academy manager Nicky Butt told The Times. “We’ve got some unbelievable players. Angel Gomes is a young talented player we’ve massive hopes for.”

The story by Simon Jones is extremely low on detail, but uses the word ‘monitoring’ to describe Barcelona’s interest. Can’t help thinking that everyone is monitoring everyone.

FABREGAS AND COURTOIS OUT OF CHELSEA
We’ve been hearing about Cesc Fabregas possibly joining Milan for a while, but the latest development is that Milan sent a party to Stamford Bridge for Saturday’s game against Leicester. Hope they were impressed by Fabregas’ ability to not even be on the bench.

The Daily Mirror says that Milan used the opportunity to enquire about Fabregas. It’s clear that he’s going to leave Chelsea at some point if he doesn’t start getting some regular football.

Elsewhere, The Times report that Antonio Conte is prepared to sell Thibaut Courtois next summer. Things haven’t really gone too well, have they? Go back to Atletico, sunshine.

AND THE REST
Sunderland have been in contact with consortiums from China over a possible takeover, with owner Ellis Short willing to listen to offers of more than £150m for his rock-bottom side… Inter Milan are lining up Michy Batshuayi as a replacement for Mauro Icardi, according to reports… Arsene Wenger has called in a Paris-based turf technology firm hoping to quash the injuries that have hampered his side in recent months… Neymar’s new contract at Barcelona has a few conditions. The buy-out clause is fixed at £181m for the first year of the deal, £200m for the second year and £226m for the remaining three years… Arsenal are considering a swoop for former Chelsea defender Zech Medley… Arsenal striker Yaya Sanogo could be going on loan to Saint-Etienne, according to reports.