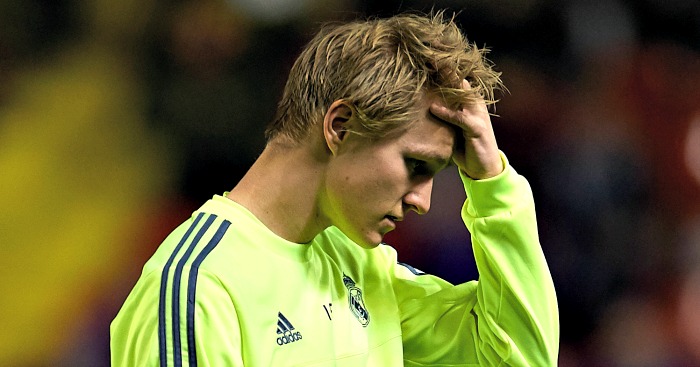 REAL MADRID WANT DAVID ALABA
Reports in Spain claim that Real Madrid are interested in Bayern Munich left-back/right-back/central midfielder/anywhere else David Alaba. AS reports that Real will bid €65m for the Austrian, but also say that Bayern Munich would like Pepe plus that money.

The suspicion was that Real Madrid were running low on disposable income, thus pricing them out of a move for Paul Pogba. Yet if these reports are true, they will pay similar money for Alaba and Sissoko.

Here’s what Alaba’s dad said in June about reported Real interest: “Madrid is a great club and this interest makes us proud. That is all I should say, nothing more.”

ODEGAARD WANTS LIVERPOOL SWITCH
Martin Odegaard is stalling on a loan move to the Bundesliga as the Real Madrid teen waits to see if Liverpool revive their interest in him.

According to the Daily Mail, the 17-year-old will leave the Bernabeu on a temporary basis as Zinedine Zidane feels the midfielder is not yet ready for first-team football with the Spanish giants.

The Norway international has a move to Germany in his sights, with Bayer Leverkusen and Hamburg interested, but the report suggests he would like to play under Jurgen Klopp.

Liverpool were one of a number of clubs who battled to sign Odegaard when the youngster broke through at Stromsgodset aged just 15, and the teenager wants to discover whether a move to Anfield is once more a possibility.

Little hint for you Martin: It isn’t a possibility. The last thing Liverpool need is another attacking midfielder.

SLIMANI TO THE PREMIER LEAGUE
Islam Slimani has been linked with a Premier League move for as long as we can remember. Arsenal, Liverpool, Leicester, Manchester United, Tottenham and Chelsea have all been mentioned in the past, yet the Algeria forward still remains at Sporting SC.

Not for long, if reports are to be believed. The Sun claim that Slimani has handed in a transfer request in Portugal, following a mystery offer from an English club to the value of £16.75m.

The Sun mention both Everton and Southampton regarding this new offer. Both would make complete sense.

AND THE REST
Chelsea are eyeing Steaua Bucharest attacking midfielder Nicolae Stanciu, who is rated at £6million… Fernando Llorente will undergo a medical at Swansea ahead of the striker’s move from Sevilla… Swansea also want to sign fellow Spanish striker Borja Baston from Atletico Madrid in a £7million… Watford midfielder Mario Suarez could be reunited with former boss Quique Sanchez Flores at Espanyol… Stoke have beaten Tottenham and West Ham in the race to sign AFC Wimbledon defender Ryan Sweeney… Everton winger Conor Grant has joined Ipswich on a season-long loan.