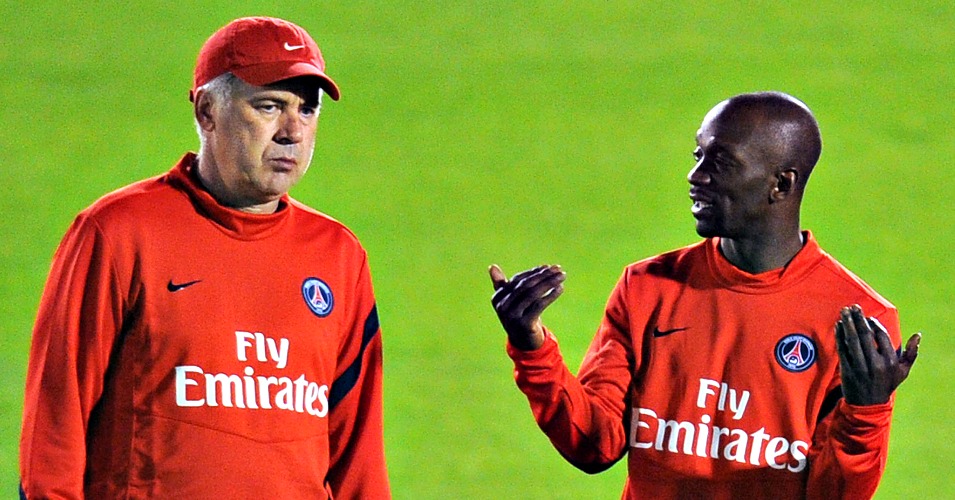 ANCELOTTI AND MAKELELE FOR CHELSEA
The Daily Mail dream team of Matt Lawton, Matt Barlow and Charles Sale come together to bring us big news from Stamford Bridge, and it’s about a potential suitor for Jose Mourinho’s job. Well, two potential suitors.

The men in question are Carlo Ancelotti and Claude Makelele, in keeping with the ‘you must have been associated with Chelsea at some point in the past’ rule. Ancelotti and Makelele worked together during the Italian’s time as manager of Paris Saint-Germain, and it is now believed that they have emerged as candidates to replace Mourinho if he goes.

Both are popular figures at Stamford Bridge, Ancelotti sacked a season after winning the Double and Makelele – who has a place in our list of the top 10 French Premier League imports – winning two Premier League titles during his time as a player there.

Those two are not the only men linked with the Chelsea job on Tuesday morning however. Step forward Premier League winner Roberto Mancini.

Italian newspaper Corriere della Sera claim Mancini, who won the Premier League title in 2012 with Manchester City, is a ‘viable candidate’ to replace the Portuguese if he leaves.

Mancini is currently at Inter Milan after being sacked by City and leaving Galatasaray by mutual consent.

EVERYONE WANTS ADEBAYOR
Watford, Galatasaray, Bournemouth, Sunderland, Chelsea, you name ’em, Adebayor’s being linked with them.

Linked mainly by Darren Lewis of the Daily Mirror, that is. Lewis claims that Watford are the newest suitors for the free agent, with the Hornets considering making a short-term deal available to to Togo striker in January. Only Stoke have scored fewer goals than Quique Sanchez Flores’ men, but considering eight of their ten strikes have been scored by either Odion Ighalo or Troy Deeney, we don’t see how another striker – particularly an Adebayor – would help.

Lewis goes on to report that Adebayor’s preference is to stay in London, which is where the Chelsea link somehow crops up. They have three struggling strikers, so apparently they need a fourth.

MERSEYSIDE BATTLE FOR TELLO
‘Barcelona outcast Cristian Tello becomes transfer target for Liverpool and Everton – report,’ reads the headline on The Metro, so let’s look through the keyhole.

Surprisingly, it is very much as it sounds; Tello is currently on loan at Porto and is keen to find a new suitor as opposed to rejoining Barcelona in the summer. At the top of that list are Everton and Liverpool.

The reports come from Portuguese paper A Bola, which is starting to build a reputation akin to that of The Metro and Calciomercato, so read into that what you will.

AND THE REST
Manchester City are looking to boost their firepower win an £8m swoop for Atletico Madrid’s exciting centre-forward Angel Correa…Kevin Mirallas is growing increasingly concerned that his lack of minutes for Everton will hinder his hopes of going to Euro 2016 with Belgium…Inter Milan are willing to offer Radamel Falcao an escape from his Premier League struggles in January with another loan for Chelsea’s borrowed forward – but only if the striker takes a pay cut…Manuel Lanzini has a £5.5m buy-out clause in his contract which West Ham will look to trigger to make his loan move permanent.