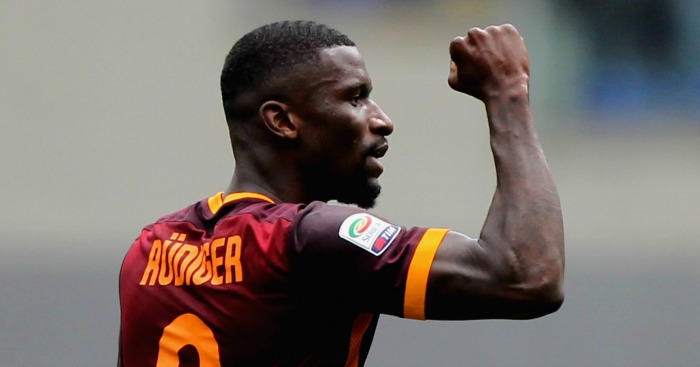 CHELSEA VS MAN UNITED FOR RUDIGER
Chelsea must be enjoying all this talk of them buying a new central defender, because they have hardly conceded a goal since it started. In recent weeks Antonio Conte has been linked with a move for Pepe, Leonardo Bonucci, Ben Gibson, Presnel Kimpembe, Alessio Romagnoli, Boubacar Kamara and Michael Keane. They’re definitely all on the way.

Now we have another new name: Antonio Rudiger. The Daily Mail claim that Chelsea are readying a £35m bid for the Roma defender, but will face competition from Manchester United. United have also been linked with about four other central defenders.

Can we have an amnesty? Both clubs clearly want a centre-back either in January or next summer. Rather than claiming that bids are being readied, how about we all agree that no decisions have been made on targets yet?

CITY WANT BAYERN’S BERNAT
Another regular gossip column staple is a Bayern Munich player being linked with a move to Manchester City, which is hardly a ridiculous assumption. Pep Guardiola must have a few favourites in Munich.

The latest one to be touted for a reunion is Juan Bernat, who The Sun claim is the target of a potential £20m bid. Fred Nathan has the exclusive on this one, another of those names who does regular online exclusives but never has his name in the paper. Weird.

Bernat is a fair shout, really. Guardiola was impressed by him at Valencia and signed him after moving to Germany. He plays at left-back and is only 23 years old, already better than Aleksandar Kolarov and Gael Clichy. He’s not regularly getting into Bayern’s first team, making a move more likely. Does Guardiola think he can improve Bernat enough to make him a part of his City project?

WEST HAM EYEING ICARDI
A dose of something a little more silly, now. The Daily Star report The Sun who report that West Ham want to sign Mauro Icardi for £25m after he fell out with Inter ultras.

AND THE REST
Steve McClaren wants to be reunited with Chris Martin at Derby in January. Martin is on loan at Fulham in a season-long deal… Southampton boss Claude Puel is keeping tabs on teenage Espanyol midfielder Marc Roca… David Moyes could face an FA charge after a tunnel confrontation with referee Bobby Madley following Sunderland’s defeat to West Ham… Yeah, not much about today).