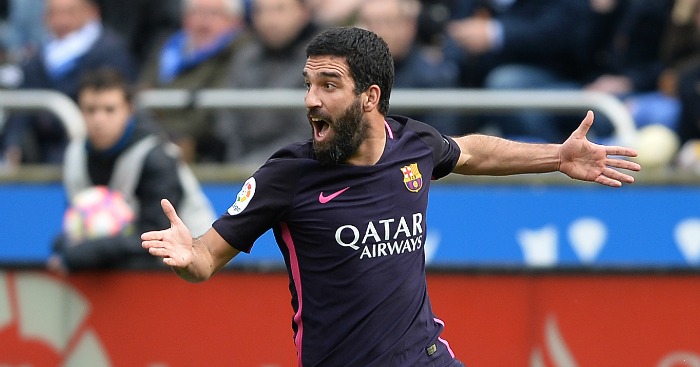 ARSENAL TARGET ARDA
Glory be, we have some new transfer gossip with a new, interesting name. And it comes from The Times, who claim on their back page that Arsenal have identified Barcelona’a part-time Turkish attacking midfielder Arda Turan as a replacement for Mesut Ozil. We are slightly struggling with the idea of Arsenal paying £25m for a 30-year-old but we are willing to embrace this new transfer gossip with gusto. And Arsene Wenger is ‘reinventing’ himself and everything.

According to The Times, Arsenal accept that Alexis Sanchez and Ozil will leave this summer and Turan is ‘looking for one more big move as he approaches the end of his career’. He has started just 13 La Liga games for Barcelona this season but has scored 13 goals in all competitions, including a hat-trick against Borussia Monchengladbach.

MAN UNITED IN MASSIVE MBID
This sounds mental yet we are not here to judge (we are) but to bring you the latest gossip. According to Spanish radio station Cadena Cope, Manchester United have had a £95m bid for Kylian Mbappe turned down by Monaco.

We have few questions:

1) How would a Spanish radio station know about business between English and Spanish clubs?

2) Why would Man United make a bid outside the transfer window?

3) Why would Man United make a bid when they do not know which European competition they will be playing in next season?

4) Why would Monaco turn it down?

5) Will we ever get that Hanson song out of our heads?

MAHREZ TO LIVERPOOL, JUVE OR BARCELONA?
Now this comes from Barcelona newspaper Sport so it’s basically a big fat message to Riyad Mahrez that they want him to resist the approaches of Liverpool and Juventus because the Blaugrana would quite like to get him on the cheap.

Clearly, Mahrez would be a squad player at Barcelona but would be more prominent for Liverpool, so it could be a tough decision. What we do know is that he is too good for Leicester.

AND THE REST
Gunners midfielder Jack Wilshere is unlikely to stay at loan club Bournemouth beyond this season, and will consider a move abroad…Everton winger Gerard Deulofeu, who is on loan at AC Milan, is a target for West Ham…Sunderland’s Swedish midfielder Sebastian Larsson says there will be no discussions about a new contract until the season ends.