Home All The News Gossip: Arsenal and Chelsea linked with Helder Costa 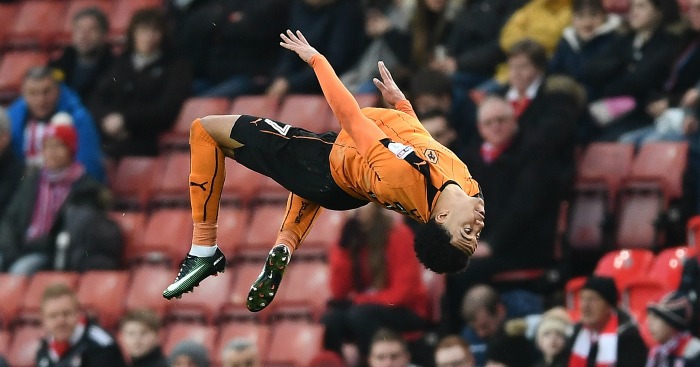 ARSENAL AND CHELSEA WANT HELDER
Arsenal sent ‘spies’ to watch Wolves winger Helder Costa on Saturday, it says here in The Sun. Are ‘spies’ the same as ‘scouts’? Anyway, the newspaper claims that Chelsea boss Antonio Conte was impressed with the Portuguese winger when his side beat Wolves in the FA Cup and that Arsenal also ‘fancy’ him.

He joined Wolves in January for £13m and is the Championship club’s top scorer with ten goals in all competitions. The Sun now claim that Costa is worth £20m, which looked a little steep when he missed a penalty and then got subbed off against Rotherham at the weekend. His agent? Jorge Mendes.

PEP TO RAID BAYERN FOR CITY
There is definitely work to be done at Manchester City this summer and the Daily Mirror claim that coach Pep Guardiola ‘wants at least two new full-backs and fresh options in central defence and midfield’. Which sounds about right as they are an ageing defensive force.

One player eyed by Guardiola is 22-year-old Bayern Munich man Joshua Kimmich, who is being used primarily as a substitute by his successor Carlo Ancelotti.

“It does not matter whether I understand it or not,” said Kimmic. “The fact is I’m not satisfied with it and I want to change it.”

But would Bayern sell a player who is seen as the long-term successor to Philipp Lahm both as right-back and captain? It would take a ‘giant fee’, it says here. They also claim that Juan Bernat could be another target.

AND THE REST
Alan Pardew is interested in the vacant manager’s job at Norwich…Kyle Lafferty will quit Norwich this summer…Chelsea are also hoping to tie up deals for two of Europe’s most highly rated teenagers – Rangers midfielder Billy Gilmour, 15 and Ajax’s Daishawn Redan, 16…Premier League strugglers Sunderland are interested in signing Germany-born Besiktas midfielder Tolgay Arslan.