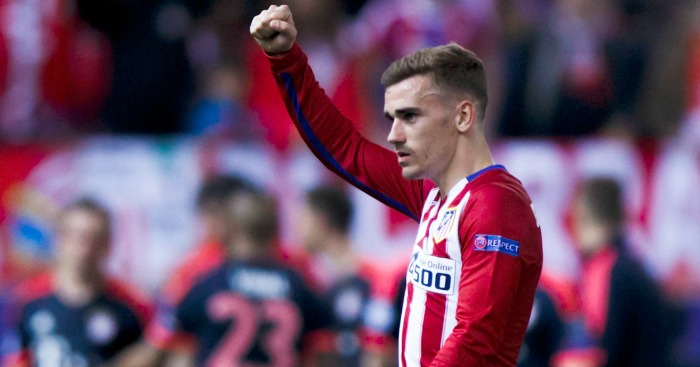 ARSENAL TO MAKE BONY BID?
We’ll start with the Daily Star, and their claim that Manchester City back-up striker Wilfried Bony is a transfer target for Arsenal.

It’s clear that Bony needs a change. That move to Manchester City really hasn’t worked out well, with Kelechi Iheanacho surely now ahead of the Ivorian in the striker queue. Bony has been linked with a move to Everton, Swansea, Crystal Palace and West Ham, but would surely prefer Arsenal.

Chief sports writer David Woods has the ‘exclusive’ news that ‘some factions’ at Arsenal would like the club to sign Bony, but that Wenger is yet to be convinced. The best exclusives are the ones that can never be disproved.

…OR IT’S GRIEZMANN OR LEWANDOWSKI. SURE.
We can’t not go to The Sun next, given how spectacular the claims in their Arsenal ‘exclusive’ are. Because I’m lazy, here are a list of lines from that story:

‘Arsenal boss Arsene Wenger wants to bring in a superstar striker before the end of the transfer window – with Robert Lewandowski and Antoine Griezmann his top targets.’

‘His main target is Bayern Munich forward Lewandowski, who has stalled on signing a new contract because of his huge wage demands. Wenger has been an admirer of the Poland ace, 27, since his days at Dortmund, and initial talks have begun on whether a deal could be struck with the German giants.’

‘There is hope in landing Griezmann, as it emerged today he has an £85.5m buyout clause.’

Now listen here. We believe that Arsene Wenger would prefer to sign a superstar striker rather than just a ‘make do’ player, largely because he’s said exactly the same himself.

What we don’t believe is that talks have begun over Lewandowski or that there is any hope of Arsenal signing Antoine Griezmann. You can ‘exclusive’ those thoughts, too.

EVERTON TO REIGNITE MATA INTEREST
To The Times now, and their claim that Everton will reignite their interest in Juan Mata, with the confidence that Manchester United would be prepared to let him leave.

Everton will shortly announce the signing of Yannick Bolasie from Crystal Palace, who would presumably play on the left wing with Gerard Deulofeu and Aaron Lennon competing for a spot on the right. It is worth pointing out that Deulofeu’s recent pre-season form has been woeful.

That would leave a space for Juan Mata as a No. 10 behind Romelu Lukaku, with Ross Barkley slightly deeper than that with a holding midfielder. Sound sexy enough?

Most reports do say that United don’t want to sell Mata, but today is not a day for flies in ointments.

LIVERPOOL BLOCK LUCAS DEPARTURE
Well, well. Lucas Leiva is becoming Mr Teflon at Liverpool, with more lives than five cats (that’s 45 lives). Every time it looks like the Brazilian is on his way out of the club, there comes a last-minute reprieve.

This time is no different. Lucas was reportedly on the verge of a move to Galatasaray, but Jurgen Klopp has called the whole thing off with the pen out and top off.

“We are no longer pursuing Lucas Leiva,” says Galatasaray big cheese Levent Nazifoglu. “We will continue efforts to sign alternative names instead.” Informative is sexy.

AND THE REST
Yannick Bolasie will complete his £25m switch from Crystal Palace to Everton in the next 24 hours. The 27-year-old Congolese winger will earn around £90k a week at Goodison Park… Eintracht Frankfurt have held discussions with Chelsea over the possible loan of defender Matt Miazga… Atletico Madrid have made a €20m (£17.2m) offer for Santos and Brazil striker Gabriel Barbosa, 19, who is reported to be a target for Leicester… Manchester City’s 21-year-old Belgium defender Jason Denayer could move to Galatasaray permanently, after spending last season on loan at the Turkish club… Everton target Lamine Kone has told new Sunderland manager David Moyes: ‘Back me or sell me’… Hull City could soon be under Chinese ownership after it emerged the owner, the Allam family, are in advanced talks to sell the Premier League club… Leeds United are close to making Bristol City’s 24-year-old centre-half Luke Ayling their eighth summer signing, for £750,000.