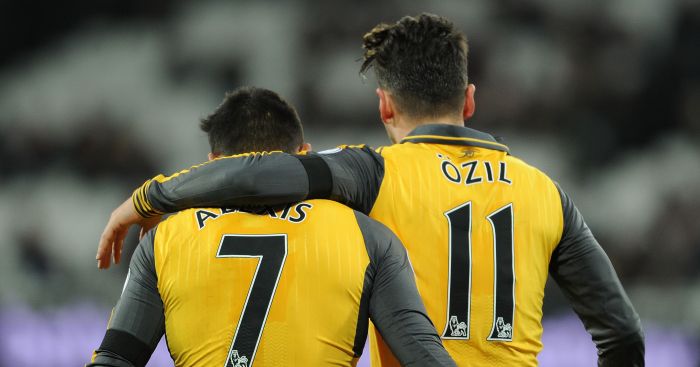 ARSENAL SET TO OFFER NEW DEALS TO STAR DUO
Arsenal will offer Alexis Sanchez £300,000-a-week to try and keep him at the club and away from Manchester City and Paris Saint-Germain, The Sun claims. You have to admire their commitment to repeatedly asking him.

According to various reports, the Gunners previously offered £225,000 plus bonuses that could have amounted to £275,000 a week.

Apparently, Sanchez has “accepted” Arsenal’s stance that he will not be allowed to leave this summer, which contradicts reports that he was set to submit a transfer request.

Meanwhile, the Sun also states that Arsenal are confident they will keep Mesut Ozil at the Emirates on a deal worth £225,000-a-week.

They claims that a “HUGE” breakthrough in negotiations has been made as Ozil “is giving the impression” that he will accept the deal. A colossal advancement, we’re sure you will agree.

BARKLEY WARNING
The Daily Mirror claims that Tottenham have been warned they will not get Ross Barkley cheap and not to wait until the end of the summer window to try and sign him.

This comes after Ronald Koeman appeared to do somewhat of a U-turn on his previous stance that Barkley would 100% leave this summer.

“I believe he will make the move,” said Koeman. “If not he is a player of Everton and if he shows to me he is one of the best then it is possible he can start, like everyone.”

Everton are apparently holding out for £50million for Barkley, who has just 11 months left on his contract. Good luck, guys.

RAKITIC OFFERED TO LIVERPOOL
Barcelona have reportedly offered midfielder Ivan Rakitic to Liverpool in an attempt to land Philippe Coutinho, and Jurgen Klopp is keen.

The Daily Star claim that “The Kop are reluctant to sell their star man”. Not really sure what say they have in it, but regardless, this is the second time that the Star have reported Rakitic being offered.

They stated on July 30 that Klopp is “a big fan of the Croatia international” and “would love to have him at Anfield”.

He may well love Ivan, but keeping Coutinho is a tad more important at this stage.

AND THE REST
Serge Aurier has agreed a five-year deal with Manchester United but the club are yet to agree a fee with Paris Saint-Germain…Liverpool have sent scouts to watch Gremio forward Luan…West Ham’s Manuel Lanzini is also set for a big pay rise to stave off interest from Liverpool…West Ham have offered £27.1m for Sporting Lisbon midfielder William Carvalho…Tottenham again scouted Porto right-back Ricardo Pereira…Philippe Coutinho will have to demand a transfer to have any chance of securing a move to Barcelona…Newcastle and West Ham are locked in a bidding war for Brentford playmaker Jota…Arsenal’s hopes of signing Nice midfielder Jean Michael Seri have been boosted…Manchester City are set to sign defender Nicolas Freire from Argentinos Juniors.