Home All The News Gossip: Arsenal signing striker and more 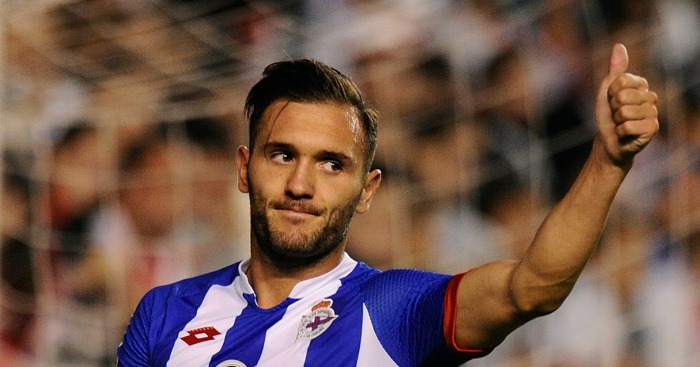 LUCAS PEREZ TO ARSENAL
According to El Confidencial, Deportivo La Coruna striker Lucas Perez (scorer of 17 La Liga goals last season) is ‘almost certainly’ joining Arsenal, while Marca go even stronger, saying that there is ‘total agreement’ between the two clubs for the transfer of the Spaniard who has a buy-out clause of £17m. Perez has started the season in fine fashion with a goal and assist in Deportivo’s 2-1 win over Eibar at the weekend.

As for the centre-half problem, this update comes from the Daily Mail: ‘Shkodran Mustafi remains the club’s primary target, but the move has stalled due to Valencia insisting Arsenal must match the Germany international’s £42million release clause.’

That snippet comes in a story claiming that Calum Chambers is available on loan and is of interest to West Brom, Hull, Stoke and Sunderland.

STOKE WANT SAKHO ON LOAN
‘Mark Hughes is ready to offer Liverpool outcast Mamadou Sakho an escape route with a loan move to Stoke City,’ says the Daily Telegraph. Which sounds awful kind of Mark Hughes. Obviously, getting a very good centre-half without the £20m outlay is just a bonus to the Potters boss, whose summer moves for Joe Allen and Ramadan Sobhi have been underwhelming.

Liverpool have no interest in losing Sakho permanently but he does need to find some form and focus and it might make sense to send him down the road to Stoke, who have received no encouragement from Manchester United in their pursuit of Phil Jones.

HAMMERS TO FINALLY GET THEIR MAN
It looks very much like Simone Zaza might become a West Ham player in the coming days, with Gazzetta dello Sport claiming that the east London club have agreed to pay £21m to Juventus for the striker who started just five Serie A games last season even before they spunked a fortune on Gonzalo Higuain. With £60,000 a week in wages on the table, it’s a move that evidently suits all parties.

Slaven Bilic said this week: “In terms of signings, if something good quality-wise comes up, we are going to act. We were linked with [Zaza] last year and he is a top player. We were in contact with him last year and will see what happens.”

AND THE REST
Valencia have turned their attentions to Manchester United defender Marcos Rojo…Chelsea have made a £35m offer for AC Milan defender Alessio Romagnoli…Liverpool forward Mario Balotelli  is in negotiations with Swiss club FC Sion…Southampton are set to break their transfer record by signing Moroccan attacking midfielder Sofiane Boufal…Sunderland are in talks to sign defender Javier Manquillo...Juventus have stepped up their interest in Paris St-Germain midfielder Blaise Matuidi…Tottenham midfielder Nabil Bentaleb is closing in on a move to Schalke.