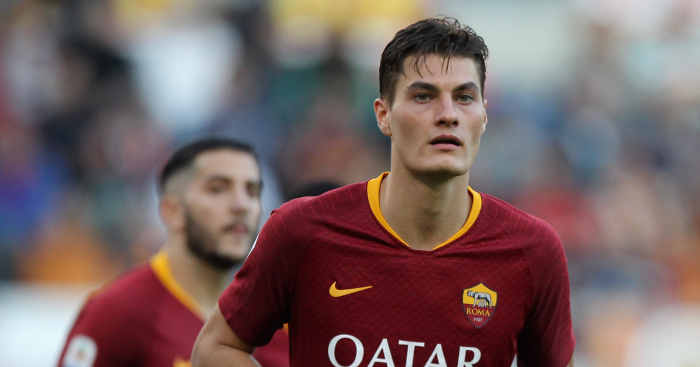 SCHICK AND TIRED
Over the weekend, Arsenal were said to be considering replacing Danny Welbeck by making the third biggest signing in their history. That was slightly downgraded within a matter of days.

Corriere dello Sport were the first to report that the Gunners were exploring the idea of signing Roma striker Patrik Schick on loan to fill the void left by Dat Guy. They claimed that Roma were planning to sell the forward in January, and that Schick himself ‘likes Arsenal’.

They started throwing out ideas, like how Arsenal ‘could offer’ Aaron Ramsey in some sort of weird loan part-exchange deal. But Roma do not seem enamoured with that idea.

“Schick? We have confidence in him, he won’t leave on loan,” said sporting director Monchi when questioned over his future.

So yeah. That’s that. And considering Schick can pretty much only play centre-forward, and has one goal in nine games this season, he is not quite as versatile nor as brilliant as Welbz.

STEADY, EDDIE
A more realistic replacement in many ways is Eddie Nketiah. He is most certainly the cheapest option, and would allow Unai Emery to garner yet more goodwill by handing first-team opportunities to a promising youngster.

“The first [choice] is to look inside,” Emery said over the weekend. “We have one striker also who is working well with the under-23s and is improving also, Eddie Nketiah, and he could have chances.

“But I think it’s early for speaking about the possibility [of making signings] in January.”

Arsenal have eight Premier League games from now until January, with Nketiah likely looking ahead to Europa League ties with Vorskla and Qarabag as his chance to make an impact. Emery might even chuck him in against Tottenham in the League Cup quarter-final…

YACINE IT HERE FIRST
Will we ever see Yacine Brahimi in the Premier League? The Porto winger has been linked with a move to England for eons, proudly wearing the crown bestowed upon him by Simao Barbosa. And O Jogo suggest he could finally be gracing these shores soon.

You see, Brahimi has six months left on his Porto contract, and that has alerted Everton, Newcastle and West Ham to his availability. Those are the three clubs always linked to players not quite good enough for the Big Six, which is fun.

Brahimi will be able to talk to foreign clubs in January, and would apparently appeal to Everton because Marco Silva is Portuguese and must therefore be obsessed with players from the league, would tickle Newcastle’s fancy as he would be free, and would be to West Ham’s liking because he does all those fancy flicks and stuff.

Of course, the most likely outcome is that he joins Fenerbahce or something.

AND THE REST
Manchester City are lining up a £50m summer move for Ajax’s 21-year-old Netherlands midfielder Frenkie de Jong, despite the threat that the club could face investigations over their finances… Paris St-Germain’s Brazilian right-back Dani Alves, 35, says “it is not possible” he will end his career without playing in the Premier League…