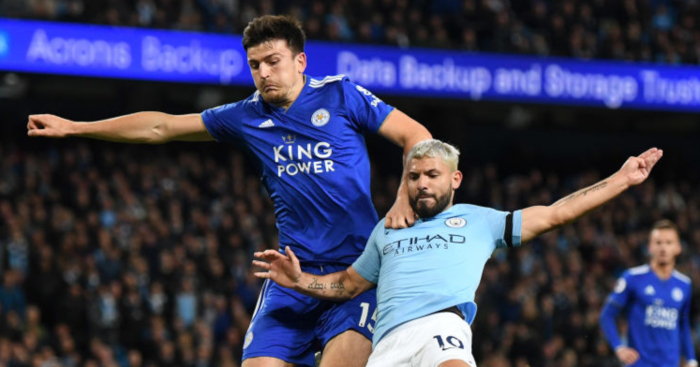 THE NEW VINCENT KOMPANY IS…
…Harry Maguire, according to the Daily Mail, though it seems this idea is based solely on the fact that Pep Guardiola praised the England man for his performance after City’s 1-0 win over Leicester in the final weeks of the season, rather than any actual knowledge of a proposed City move.

So what would the price be? Well, it’s all rather vague and boils down to ‘an even bigger sum’ than the £60m they paid for Riyad Mahrez and it ‘might have to eclipse the £75m price Liverpool paid for Virgil Van Dijk’. Hmmm, we are not convinced that City would pay anywhere near £80m for Harry Maguire, but it’s a nice little rumour.

MEANWHILE IN THE EUROPA LEAGUE…
…the targets have to be a little cheaper, with Goal reporting that both Arsenal and Manchester United are interested in teenage Saint-Etienne defender William Saliba. They claim that the Gunners ‘have watched Saliba extensively this season’ as he has made the breakthrough to senior football. They have noticed that he is really very tall, which is an important asset in a centre-half.

United have previously shown an interest, with Jose Mourinho comparing him to Kurt Zouma. Interest from across Europe is likely to drive his price up to £25m, which would be a fair chunk of the £45m available to Unai Emery this summer if they fail to beat Chelsea in the Europa League final.

Of course, that £45m would rise if they can find buyers for Carl Jenkinson, Mohamed Elneny, Henrikh Mkhitaryan and Shkodran Mustafi, with Emery desperate to shake up the squad.

AND THE REST
Alexis Sanchez will return to pre-season training early with Manchester United to force through a move, which seems like really very bizarre logic indeed…Yannick Carasco is leaving China and could be of interest to Arsenal…Arsenal and Juventus are monitoring Roma’s Greek defender Kostas Manolas…Tiemoue Bakayoko will return to Chelsea this summer as AC Milan do not want to pay £35m…Wolves have opened talks with Salomon Rondon, jumping ahead of Newcastle and Everton in the queue.