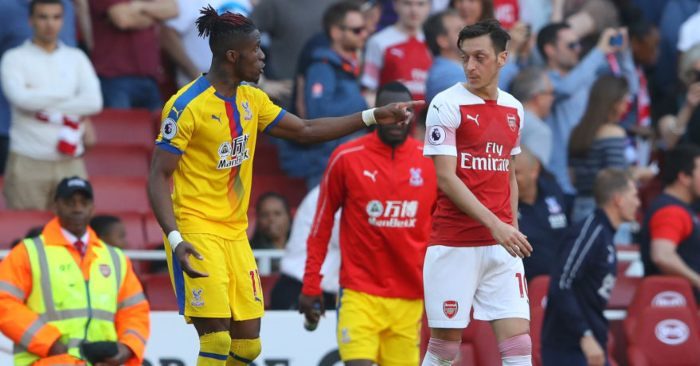 HOW BIG IS THAT ARSENAL BUDGET AGAIN?
Now whether Arsenal can really get Wilfried Zaha for just £55m is another matter, but The Sun claim that ‘Unai Emery will ask Arsenal to break the bank for Wilfried Zaha’. It seems that Emery sees Zaha as ‘central to his summer rebuild’ and is asking the club to push the boat out for a player who claims he was – and actually still is – an Arsenal fan. They do desperately need pace and width and Zaha would certainly fit the bill. Now to persuade Crystal Palace to sell their two best players in one window…

Arsenal also need a left-back and The Times claim that they have gone big and hard for Celtic’s Kieran Tierney, making a second bid after their initial £15m offer was turned down. But the Gunners are still said to be ‘some way short of the £25 million valuation placed on the player’s head by Peter Lawwell, the Celtic chief executive’. Everton and Napoli are also said to be interested in Tierney.

So how are Arsenal going to raise some funds? Well, by loaning and then selling Lucas Torreira, according to Sport Mediaset in Italy. AC Milan are said to be interested in the Uruguayan, who has failed to settle in England and could pay £7m for a two-year-loan followed by a £34m transfer at the end of that spell.

MAGUIRE GOING TO MAN CITY?
Last week we were told that Harry Maguire was joining Manchester City for £65m and now the Daily Mirror have come up with the rather more believable figure of £80m and claim that the deal could be completed this week. We do hope so.

Maguire will apparently earn £280,000 a week at Manchester City but that’s hardly the point; he will be playing under Pep Guardiola in a team that is already odds-on favourites to win the Premier League next season. Go on, Slabhead.

Not a chance you can't find a better centre-back than him for half that money. https://t.co/ubXya5RxWe

AND THE REST
Inter Milan and Manchester United are still some way apart in their valuation of Romelu Lukaku…Sheffield United are interested in Huddersfield Town midfielder Jonathan Hogg…Manchester United are ready to trigger Marcus Rashford’s one-year extension…Real Betis are interested in Liverpooland Belgium striker Divock Origi…Brightonhave agreed to sign Belgian winger Leandro Trossard from Genk for £18m…Burnleyhave told defender Ben Gibson that he can leave the club this summer…Maurizio Sarri is keen on bringing Pepe Reina to Juventus as back up to Wojciech Szczesny…AZ have begun talking with Southampton misfit Jordie Clasie.