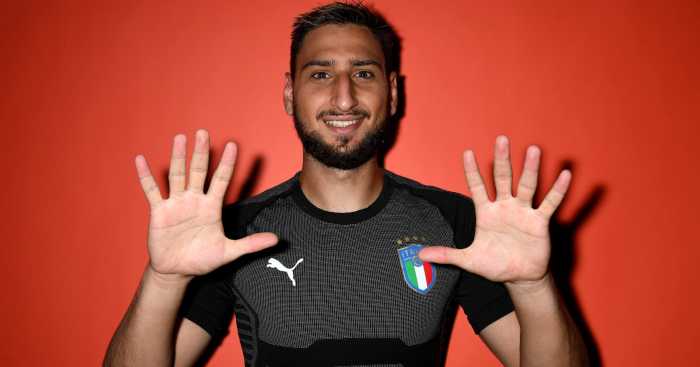 ARSENAL TO BLOW THE BUDGET ON MILAN KEEPER
Arsenal have a limited transfer kitty this summer, which could be restricted further by defeat in Wednesday’s Europa League final. So, of course, the Gunners are being linked with a budget-blowing move to strengthen the one position which doesn’t need it.

According to TMW, Arsenal are considering a move for AC Milan goalkeeper Gianluigi Donnarumma. Apparently, Unai Emery hasn’t been convinced by Bernd Leno and the Gunners chief has asked the club to speak to Milan about Donnarumma.

Milan’s own failure to qualify for the Champions League means they might have to raise some funds but they would still expect a whopping fee for the 20-year-old – a similar amount to the £67million Liverpool paid Roma for Alisson last summer.

It has been widely reported that Emery will have around £45million to spend this summer and if victory in Baku bumps that figure up by another 50 per cent, he may have enough for Donnarumma. Arsenal still need at least four other recruits in positions in more urgent need of strengthening but why let that get in the way of some weapons-grade bullsh*t?

EMERY AMONG BARCA CANDIDATES
Arsenal’s recruitment might not be Emery’s problem. The Spaniard is one of the names in the hat to become the new Barcelona boss.

The Spanish publications are working on the assumption Ernesto Valverde will be shown the door after a nightmare month at Barca which saw them capitulate at Anfield before losing the Copa del Rey final to Valencia on Saturday. Mundo Deportivo lumps Emery in with a group of candidates which also includes Holland manager Ronald Koeman and former Juventus boss Massimiliano Allegri.

Whoever gets the gig, it seems there will be a nice welcome gift waiting for him in the shape of Matthijs De Ligt.

RAMOS WANTS CHINA MOVE
Staying in Spain where it continues to be reported that Sergio Ramos wants to leave Real Madrid.

It seemed most likely that the 33-year-old was up to his old tricks by using Man Utd to get a new deal out of Real, but LaSexta claims that Ramos really does want to go. But not to United.

Apparently, the Real skipper has asked Florentino Perez to let him leave for China. Ramos has apparently received an ‘irrevocable offer’ which prompted the player to request an urgent meeting with the president.

Real do need to raise around £300million in players sales, according to Marca. Which may or may not go towards the £1.2million A WEEK that AS claims Neymar wants to move to the Bernabeu from PSG.

AND THE REST
Perez is “hopeful” Eden Hazard will sign for Real this summer… Maurizio Sarri has agreed terms with Juventus which would earn the Chelsea boss a £1.2m-a-year pay rise… Eintracht Frankfurt striker Luka Jovic reckons England or Italy will be his next destination… Man Utd, Man City, and Real Madrid could challenge Tottenham for Real Betis star Giovani lo Celso… West Ham have had an £18m bid for Andre Gomes rejected by Barcelona… Swansea are resigned to losing Daniel James to United for £15m.