Home All The News Gossip: Arsenal to raid Dortmund; Rabiot decision due 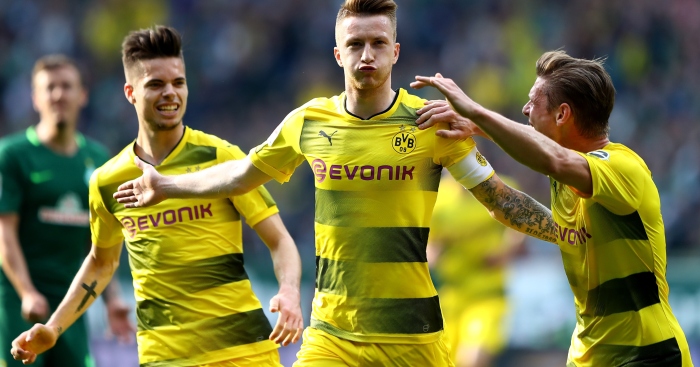 ARSENAL LINKED WITH DORTMUND MIDFIELDER
A player looks like he could be leaving Borussia Dortmund. Which these days means Arsenal must be interested.

That is indeed the claim from Bild, which reports that the Gunners are ready to pounce for Julian Weigl, who has been squeezed out of the Dortmund team this term. The 23-year-old has managed two starts in the Bundesliga but he has spent most of the season on the bench while his team-mates storm to the top of the Bundesliga.

Sven Mislintat, who moved from Dortmund to become head of recruitment at Arsenal, is apparently behind the interest, which seems to be hopeful punt at best. Arsenal do indeed need to recruit to replace Aaron Ramsey but they seem well covered for defensive midfielders.

WILL HE STAY OR WILL HE GO?
Another midfielder screener in rather greater demand is Adrien Rabiot. Liverpool and Manchester City have been linked with the 23-year-old but his future seems to come down to a simple choice: stay at PSG, or move to Barcelona.

Rabiot is free to sign a pre-contract agreement in less than six weeks but Sport is claiming PSG will have one final crack this week at persuading the France international to stay in Paris.

They claim a ‘succulent offer’ is on the table for Rabiot to consider and that PSG president Nasser Al Khelaifi will personally attempt to convince the ex-Man City schoolboy to reject Barca’s overtures. Rabiot is apparently keeping everyone guessing and both clubs believe his decision could go either way.

CITY TO WAIT FOR DE JONG
Pep Guardiola wanted Rabiot too and one point, City seemed favourites to land the player who spent a year in Manchester as a 14-year-old. But Guardiola’s interest has seemingly switched to Ajax star Frenkie de Jong.

Not that the 21-year-old will be arriving in January. Guardiola was very clear on Friday that there is “no way” he will be signing anyone during the winter window.

AND THE REST
Maurizio Sarri is hopeful Eden Hazard will follow N’Golo Kante in signing a new Chelsea contract… Chelsea and Juventus are monitoring Galatasaray wonderkid Yunus Akgun… Manchester City manager Pep Guardiola will wait until the summer to move for Ajax prospect Frenkie de Jong… Juventus are ready to block moves for Medhi Benatia and Daniele Rugani, who are wanted by AC Milan and Chelsea… Turkish side Galatasaray are interested in Dominic Solanke, who is also being strongly tipped to link up with Steven Gerrard at Rangers… Adrien Rabiot is set to have a meeting with PSG president Nasser Al Khelaifi to decide his future…Leicester are interested in signing Alaves winger Ibai Gomez.