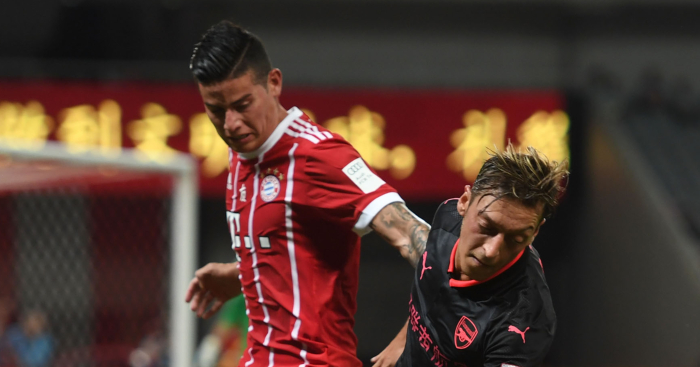 WAGE WAR
Good lord, Arsenal massively shafted themselves by offering Mesut Ozil all of the money. It has created issues with the wages of the rest of the squad, has left Unai Emery emburdened with a player he doesn’t want, and has made it almost impossible for the Gunners to actually offload him.

The Daily Mirror suggests that Arsenal will have to ‘subsidise’ some of his wages if he is to leave on loan this month. John Cross says ‘Arsenal would be willing to let Ozil go if he is not in Emery’s plans’. Was being left out of the matchday squad against West Ham not enough of a hint?

‘There have been no concrete offers yet’ unsurprisingly, with only mild interest from China and Inter Milan. But the odds are that Arsenal ‘would end up having to pay part of his wages’ wherever he goes.

COLOMBIA’S FINEST
If Arsenal do flog Ozil off until the end of the season, it would make him one of the most expensive loan players in history. Which is perhaps where they got the idea from for his replacement.

The Daily Mail have been more than a little cheeky with their headline of ‘Arsenal eye up move for James Rodriguez as they look for Mesut Ozil replacement… and deal would only cost them £3MILLION’. That criminally low fee would, of course, represent a loan down payment. That is made clear six lines into the story.

Rodriguez is currently in the midst of a two-year loan at Bayern Munich from Real Madrid, but the former would cut that deal short six months early if Arsenal pay the latter a final £3m fee.

The Colombian’s inability to break into Niko Kovac’s Bayern plans has ‘alerted Arsenal’, who believe he would ‘fit into the Emery game plan more naturally than’ Ozil.

So Arsenal are going to loan someone out and replace them by…loaning someone in.

FELL GUY
Marouane Fellaini has played 31 minutes of football under Ole Gunnar Solskjaer; Scott McTominay has managed 91 minutes. And so it comes as little to no surprise that the Belgian ‘is set to become the first casualty‘ of his temporary reign.

Around seven months after unfathomably getting Manchester United over a barrel, Fellaini’s time at Old Trafford looks to be limited. He is ‘out of favour’, and the club are ‘ready to listen to offers’.

AC Milan, Porto and Guangzhou Evergrande are all interested in the midfielder, but United will only let him go ‘if the price is right’. And that price appears to be £15m.

‘United are reluctant to let Fellaini go on the cheap and would look to reinvest funds from his sale in the first-team squad,’ David McDonnell adds. Jose Mourinho’s desperation to keep him feels an awfully long time ago.

AND THE REST
Chelsea hope to be able to progress with a deal for 31-year-old Juventus striker Gonzalo Higuain, who is on loan at AC Milan, by the end of this week… Leicester have lined up Celtic manager Brendan Rodgers to replace Claude Puel at the King Power Stadium… West Ham have turned down a bid of £8.9m from Fiorentina for 26-year-old Guinea midfielder Pedro Obiang… Liverpool striker Daniel Sturridge is set to receive several offers from Major League Soccer clubs after the 29-year-old England international entered the final six months of his contract at Anfield… Manchester United defender Marcos Rojo is set to leave the club in the summer. The 29-year-old Argentina international has played only 149 minutes this season… Bournemouth will bid £15m for Brentford and Wales centre-back Chris Mepham, 21, to prevent him joining Southampton… Chelsea have upped their offer to £36m to sign Argentina midfielder Leandro Paredes, 24, from Russian side Zenit St Petersburg… West Ham and Mexico striker Javier Hernandez wants to join Valencia, but the Hammers will not let the 30-year-old leave unless they can replace him… Manchester United have started talks with Tromso over 14-year-old Norwegian Isak Hansen-Aaroen to stave off interest from Everton and Liverpool… Manchester City have no interest in a move for 26-year-old Real Madrid and Spain midfielder Isco… Hull City’s move for Cardiff’s English defender Matthew Connolly, 31, has stalled… Southampton manager Ralph Hasenhuttl is interested in Leeds United’s English winger Jack Clarke, 18… Newcastle have not submitted a new bid for Paraguay midfielder Miguel Almiron to American side Atlanta United since their original offer for the 24-year-old was rejected in December.