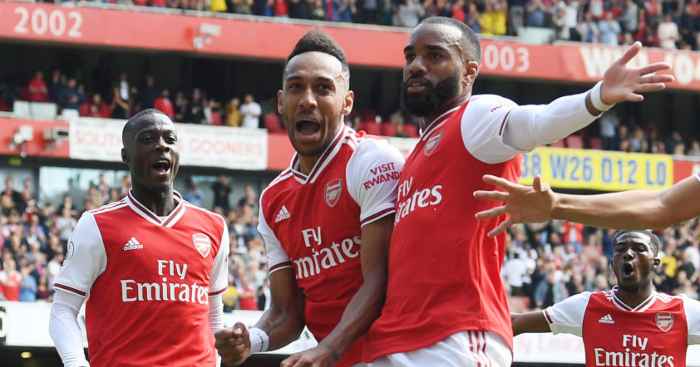 ARSENAL’S FEAR OVER AUBA AND LACAZETTE
Arsenal are apparently concerned about losing Pierre Emerick-Aubameyang and Alexandre Lacazette if Unai Emery remains in charge. Well, there seems a very simple solution…

Lacazette and Aubameyang are the two stars named by the Daily Mail but plenty more are said to be considering their futures should Emery remain at his post. Many within the Arsenal squad believe the manager is too conservative and his approach will cost the club a place in the Champions League. Maybe he feels he has to be conservative because you can’t defend for sh*t, lads?

The strike pair are in talks over new deals at the Emirates but neither appears to be in much of a hurry. Quite the opposite.

It’s hard to know exactly who is behind Emery at present, with fans, players and members of the board all recognising the problems. It would reportedly cost Arsenal £4million – one eighteenth of a Nicolas Pepe –  to sack the manager, though paying off his backroom team would increase that figure.

MILAN STRIKER UP FOR GRABS
AC Milan’s plans for re-signing Zlatan Ibrahimovic could have knock-on effect for any other clubs looking for a striker in January. Do you know any?

Because Calciomercato reckons the Rossoneri may be open to selling Krzysztof Piatek to fund Zlatan’s wages. The Poland striker is having a nightmare at Milan this season having scored only three goals, with two of those coming from the penalty spot.

That didn’t stop Manchester United and Chelsea being linked with the 24-year-old last month and we can expect those links to resurface over the coming weeks.

PELLEGRINI OUT, WILDER IN?
Most of the other whispers this morning focus on managers, what with so many of them clinging on to their jobs.

The Telegraph suggests Manuel Pellegrini has been warned by the West Ham board that results must improve, which had probably already occurred to him. The Mirror reckons Chris Wilder is in the frame to replace him, though why the Sheffield United boss would swap his current job for the West Ham gig right now is anyone’s guess.

Likewise, it seems Marco Silva has been given one last warning by Everton, though his stay of execution seems to be a result of the club’s failure to identify a replacement more than any remaining faith they have in the Portuguese.

The Daily Mail reports that Silva could remain in charge for Sunday’s trip to Leicester and the Merseyside derby next week.