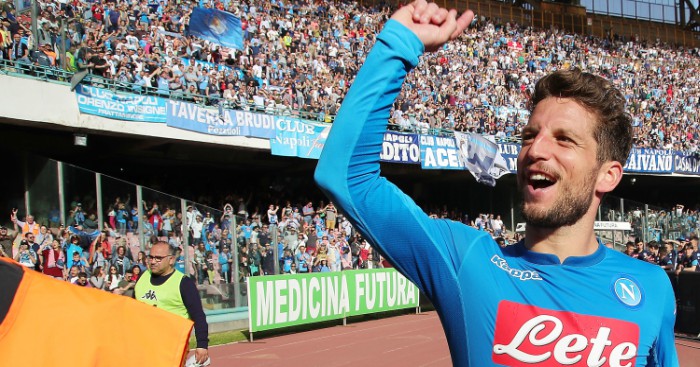 ARSENAL AMONG TRIO EYEING MERTENS
The Mikel Arteta revolution officially began yesterday and the new Arsenal boss already has his eyes on a couple of January targets.

Dries Mertens is one of them, if a report from Italy is to be believed. Il Mattino reckons the Gunners are one of three clubs sniffing around the Napoli forward, with Bayern Munich and Borussia Dortmund also interested in the 32-year-old who is out of contract in the summer.

Despite having scored nine goals and offered four assists so far this season, following on from 75 goals and 40 assists over the previous three campaigns, Napoli are not likely to renew the 32-year-old’s contract and they will accept around £8million to let the Belgian leave in January.

GUNNERS TARGET GERMANY STRIKER
The name of Kevin Volland will also be put in front of Arteta, according to Sky Sports.

The Bayer Leverkusen striker has been watched a number of times this season by Arsenal scouts, who are said to have been impressed by the 27-year-old’s ability to operate as a centre-forward or off the right flank.

Volland, a Germany international with 10 caps to his name, has seven goals and the same number of assists so far this season. The former Hoffenheim forward is in the final 18 months of his contract, so the Gunners will be looking for a deal if Arteta gives the green light.

YOUR DAILY HAALAND
Erling Haaland has narrowed his options down to a straight choice between Manchester United and Borussia Dortmund, apparently.

Bild reckons the RB Salzburg striker has decided to swerve Juventus and RB Leipzig, leaving just United and Dortmund in the frame.

There are many people at Old Trafford who reckon the deal is done. But if the teenager watched that sh*te at Watford yesterday, he might just opt for Germany instead.