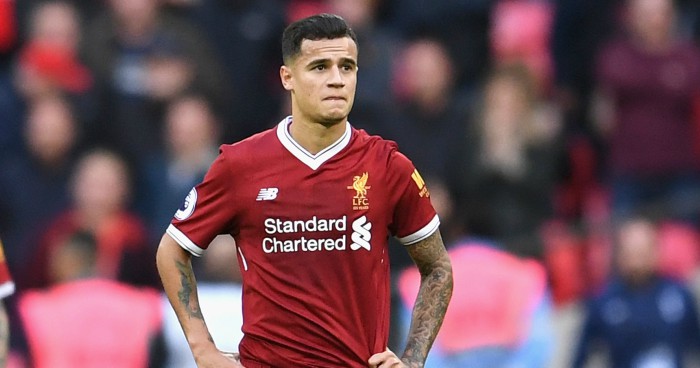 OBVIOUSLY WE’RE STARTING WITH COUTINHO
Virgil van Dijk’s future might have been sorted before the January transfer window had even opened, but there is no such luck with Philippe Coutinho. Unfortunately, this transfer is going to run and run until it finally gets completed.

The latest update is that Liverpool are going to demand silly, silly money in order to agree to any move in January. Writing in the Daily Telegraph, Chris Bascombe says that ‘Liverpool will demand an astronomical fee for Philippe Coutinho before they consider the sale of the Brazilian to Barcelona’.

Some in the Spanish media have gone further still. Onda Cero’s Alfredo Martinez says that Barcelona have been told that a deal would have to be worth almost £160m for Liverpool to accept, which would consist of €140m up front and an extra €40m in add-ons.

GORETZKA MOVE NOT YET AGREED
Manchester United, Arsenal and Liverpool have all been strongly linked with Schalke midfielder Leon Goretzka, so it came as a blow to all when reports surfaced that Bayern Munich had agreed a deal to sign him.

Goretzka is available on a free this summer, and therefore his capture would be something of a coup for whichever club managed to get the deal done. There were previous reports that the German’s preferred destination was Liverpool under Jurgen Klopp.

Despite those Bayern reports, Schalke head honcho Christian Heidel says that no deal has been done. “Leon has not informed us that he has decided to leave. I trust Leon and his adviser, with whom I was in contact with yesterday,” Heidel said.

That’s lovely, but he is leaving Christian. The only question is to which club.

TOSUN DEAL MAY COLLAPSE
It did look like Cenk Tosun’s move from Besiktas to Everton would be the second big Premier League transfer of the window after Van Dijk joining Liverpool, but that now seems to be in some doubt.

The move was so close that Everton were actually expected to announce its completion on Tuesday, but the Daily Mirror report that Besiktas have done a naughty and changed the asking price late in the day. Understandably, that has left Everton a little peeved. They believed that a deal had already been agreed.

Chances are this is just a hiccup, but Sam Allardyce et al are unlikely to react well to being held to ransom. Stop playing silly buggers.

AND THE REST
Swansea want to sign both Diafra Sakho and Andre Ayew from West Ham… Barcelona are worried that Manchester United or Manchester City could move for defender Samuel Umtiti… Manchester United are ready to send forward James Wilson out on loan… Borussia Monchengladbach have launched a £10m bid for West Ham defender Reece Oxford… Wolves defender Kortney Hausse is a target for Huddersfield and Watford.