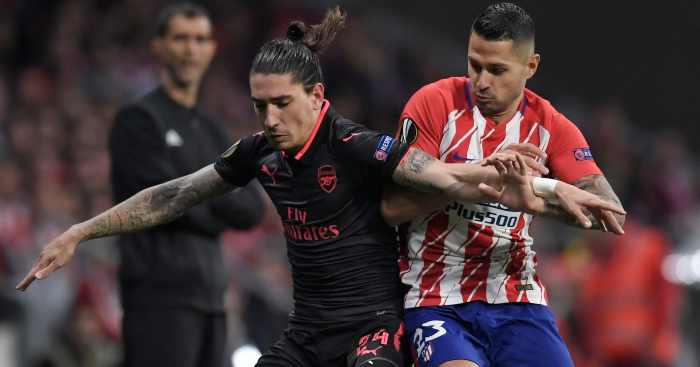 THREE ARSENAL DEALS STALL
Arsenal’s summer is going as well as you probably expected. With around £40million to spend but needing at least four new players in this market, Unai Emery is evidently struggling to replicate Jesus’s fishes and loaves trick.

Apparently, Emery tried to make £15million stretch to a new left-back but, according to The Sun, Celtic have told the Gunners to go whistle. The bidding for Kieran Tierney will have to start at £25million, regardless of how many fringe players Emery offers to sweeten the deal.

Arsenal are struggling too in their pursuits of Yannick Carrasco and Ryan Fraser. Carrasco would probably walk from China to the Emirates but Dalian Yifang are yet to decide whether they might sanction a move. And if they do, the Evening Standard reckons the Belgium winger will cost £30million.

Even that sum would not be enough to land Fraser. The Bournemouth winger has only a year left on his deal but both the club and player seem content to enter the final 12 months of their agreement. Arsenal had hoped Fraser might force the Cherries’ hand but the Scotland international won’t rock the boat.

ATLETICO PROPOSE ARSENAL SWAP
The only way Emery can swell his coffers is to sell but, unsurprisingly, the only players who would raise significant funds are the ones the Arsenal boss wants to keep.

Among that group is Hector Bellerin. The right-back was crocked for half of last season, but that hasn’t stopped Atletico Madrid registering their interest. Juventus were keen on Bellerin last summer but Arsenal’s £50million valuation scared off the Serie A champions.

According to The Daily Telegraph, Atletico will try a different approach. Diego Simeone will offer Vitolo as part of the deal in the hope Emery might be tempted by a reunion with the former Sevilla attacker.

The pair won three Europa League titles together before Emery left for PSG and Vitolo joined Atletico. But the former Spain international has struggled under Simeone, scoring just four goals in two seasons.

SPURS WANT ASENSIO IN ERIKSEN DEAL
Across north London, Spurs are making similarly slow progress. Much depends on Christian Eriksen but the Denmark playmaker seems to be having to wait on Real Madrid and Juventus to make a decision over Paul Pogba.

Goal claims Real have opted to prioritise Pogba over Eriksen, but the Spaniards will have to shift some deadwood before they can afford the Manchester United midfielder. Ole Gunnar Solskjaer just wants rid of Pogba now, according to a couple of reports.

Real had hoped an offer of £45million plus Dani Ceballos might tempt Spurs into a swift deal for Eriksen but The Sun suggests Mauricio Pochettino would prefer Marco Asensio, even if only on loan. Zinedine Zidane will oppose any plan to let Asensio leave, so the deadlock continues.

Pochettino is rather more willing to see Kieran Trippier make for the exit. The Telegraph says Spurs are expecting a £25million offer for the England right-back from Juventus, while Napoli’s interest also remains.

AND THE REST
Inter Milan need to offload Mauro Icardi before making a move for Romelu Lukaku… PSG insist Neymar is not for sale at any price… Real Madrid are keen to sign Kylian Mbappe next year but they need the striker to force a move… West Ham, Watford and Sheffield United are all interested in signing Emmanuel Adebayor as a free agent… Chelsea expect to finalise the appointment of Frank Lampard in the coming week… The Blues won’t decide on Kurt Zouma’s future until the new boss is in place… Willian will stay at Stamford Bridge despite an offer from Shanghai Greenland Shenhua… Watford, Aston Villa and Bournemouth are all fighting for Burnley keeper Tom Heaton… Fulham are eyeing Newcastle striker… Alan Pardew could become FC Cincinnati’s new manager.