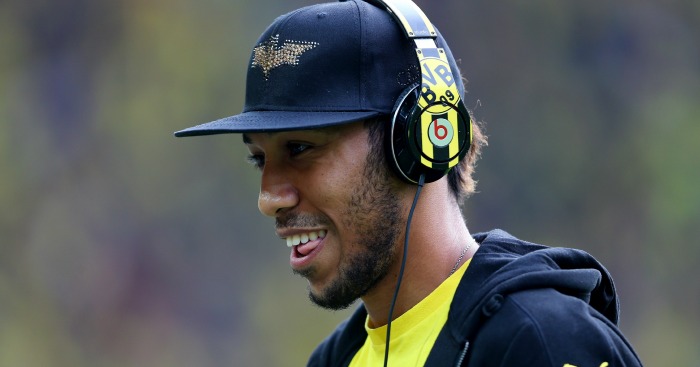 UNITED WANT AUBAMEYANG
Well would you believe it? The day after another damaging result, there are stories about Manchester United interest in one of Europe’s most valuable players. We can’t see a reason why the club would leak such ambitious bids in an effort to keep fans on side and avoid them kicking off.

The Mail on Sunday claim that United are interested in Pierre-Emerick Aubameyang. The Dortmund striker has been in sumptuous form this season, but would cost United £70m. That’s an awful lot of money.

Let’s cut to the chase. If Manchester United aren’t in the Champions League next season, these types of players will have far more attractive options than United. Saaary.

CITY TO OFFER NAVAS, BONY AND MANGALA FOR STONES?
Sorry, did we hear that correctly? In the Sunday People, Neil Moxley has gone all out on his big claim that Manchester City are prepared to give Everton Eliaquim Mangala, Wilfried Bony and Jesus Navas in return for John Stones. Sheesh.

Moxley says that City are prepared to offer three players who were signed for fees of £75m. If anything, he’s undersold that. Those three players were bought for closer to £90m. And that’s exactly why we can’t see the deal happening.

Surely City want Stones, they will put up cash? Surely if Everton are to sell Stones, they will want cash rather than three players who don’t necessarily want to be at Goodison? Player swaps are rare enough without bringing in two extra players into the deal.

ARSENAL TO SIGN KANTE (OR RABIOT)
To the Mirror now, and their claim that Arsenal will be using their game on Sunday against Leicester as a transfer audition for N’Golo Kante, with a view to signing him in the summer.

There were brief rumours of Arsenal signing the Caen midfielder before he moved to Leicester, and Arsene Wenger spoke this week about scouting Kante during his teenage years.

“Kante is a huge force in their team,” said Wenger. “Of course I know him. You look at his career and you will be amazed. Because he played in Suresnes in Paris at the age of nine, 10 years old.

“After, he went to Boulogne as an amateur. They didn’t want to sign him pro. After, he went to Caen, and then he came finally to England. But, everywhere he has been, he has always adapted to the level where he was. One of my best friends in life knows him since he was 10 years old, and he spoke to me about him.”

How unlike Arsene, talking about a good player he came close to signing. Still, much better off paying £25m this summer, eh?

AND THE REST
Leicester City’s players are to be rewarded with all expenses paid trip to Las Vegas if they can claim the Premier League title… Chelsea haven begun talks with Ajax over move for £15.5m Riechedly Bazoer, who has also been linked with Arsenal… Leicester’s Riyad Mahrez is being eyed up by Manchester City and Borussia Dortmund for a summer transfer… Paris Saint-Germain are lining up a mega £580,000-a-week deal to sign Barcelona star Neymar… Manchester United’s Juan Mata is a transfer target for at least three Chinese Super League clubs… Liverpool are plotting summer swoop for Norway international defender Havard Nordtveit… Gary Neville has announced former Liverpool assistant manager Pako Ayestaran will join him at Valencia.