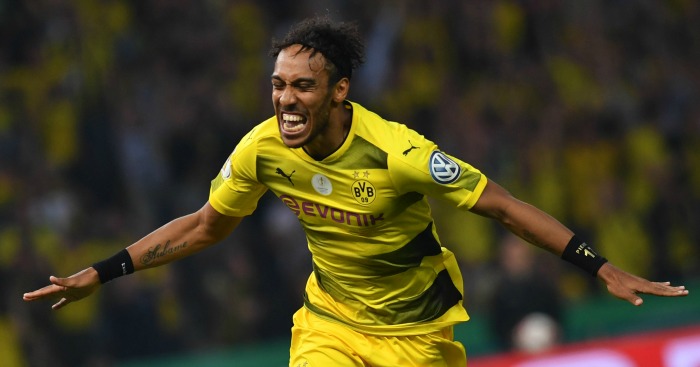 AUBAMEYANG DEAL IS ON
For all the doubts about Pierre-Emerick Aubameyang’s attitude and Henrikh Mkhitaryan’s pretty wretched form over the last year, if Arsenal pulled off the signings of both, it would be a fine response to losing Alexis Sanchez and getting rid of Theo Walcott. The pair flourished together at Borussia Dortmund.

It also looks like that deal may well happen. The Daily Mirror report that Arsenal are in talks over the signing of the 28-year-old Gabon international, who has thrown his toys out of the pram after failing to get a move to an elite club last summer. His scoring record in Germany is still fabulous.

The Mail add that Arsenal are likely to seal a £53m move for Aubameyang, which is pretty steep considering that he turns 29 in June. Yet it’s an awful lot better than the money just sitting there gaining interest while a squad creaks.

WALCOTT WILL BE JOINING EVERTON
Theo Walcott should be delighted if he gets a move to Everton in this transfer window, just so long as he plays. Having fallen completely out of favour at the club currently sixth in the league, he’s getting the gig at a club who will fancy themselves to finish seventh.

The Mirror report that Sam Allardyce is confident of getting a deal done for Walcott, and will pay £20m for him. It’s going to be really interesting to see if a move actually sparks a change in Walcott’s form, or merely provides a new home for his gradual decline. It’s Ademola Lookman we feel sorry for.

SWANSEA GOING ALL OUT
The temptation is to already write off Swansea’s chances of staying up. Most Premier League seasons involve one club sinking without trace. While 2017/18 has been the exception to that rule, the appointment of Carlos Carvalhal doesn’t seem to have provoked the complete reversal in league form or performance required. The win at Watford was welcome, but Swansea face Liverpool and Arsenal in their next two games and remain four points from safety. Other than Stoke, the teams around them are winning.

The last roll of the dice might be a January splurge. Although it was expected that Carvalhal would have little money to spend in the transfer window, WalesOnlne think different. They claim that Swansea are in talks with Atletico Madrid over the signing of striker Kevin Gameiro (ex-Paris Saint-Germain) and winger Nicolas Gaitan (ex-Manchester United gossip column staple).

We’re a long way off a deal being done, but those two really could breathe new life into Swansea’s season.

LIVERPOOL WANT SUSO BACK!
That’s according to Italian outfit Tuttosport, and we’re choosing to agree with them because Disney couldn’t produce a story as magical as this.

Unfortunately, that’s where this story falls down. Tuttosport say that Liverpool and Atletico Madrid both want the wide forward, but that Milan will not countenance any sale, and that the fee would be £80m anyway. We’ll call that a non-starter, then.