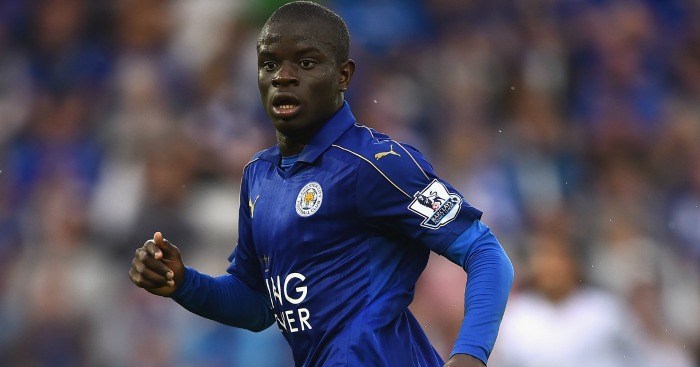 WITSEL IN, KANTE OUT AT LEICESTER
Let’s take a look at France Football for updates on Leicester’s midfield. They claim that a) Chelsea have submitted a £30m offer for N’Golo Kante and b) Leicester could be interested in Zenit St. Petersburg’s Belgian midfielder Axel Witsel. Everton have long been linked with Witsel, but this is a new suggestion for Leicester. Witsel could be available for as little as £17m as he has just a year remaining on his contract in Russia.

BALOTELLI HEADING TO CHINA?
It will be a really quite wonderful bit of business if Liverpool manage to recoup the £16m they spent on Mario Balotelli by flogging him to a Chinese club. That’s the scenario presented by Italian newspaper Corriere della Sera, who say Balotelli’s representatives have been holding talks with a host of CSL clubs in the hope of negotiating a big-money deal for the striker. The slight problem is that the Chinese Super League transfer window closes in a few hours so they had better get a move on.

DORTMUND GETTING GOTZE AND WANT TWO MORE
There is the small matter of a fee to be agreed – but reports in Germany suggest that Borussia Dortmund and Bayern Munich are only a couple of million apart in their valuations of Mario Gotze. We unashamedly wanted him to join Tottenham, but Gotze has apparently agreed personal terms with BVB and will return to Dortmund. Boo.

He could be joined there by Moussa Sissoko with L’Equipe claiming that the German club are interested in France’s best player from the Euro 2016 final. Will they still be interested when they realise that Newcastle want £35m. Another name mentioned – by The Sun – is Stoke’s Xherdan Shaqiri, with the German club apparently seeing him as the natural replacement for Henrikh Mkhitaryan.

AND THE REST
Diego Costa has told Chelsea he wants to leave & return to Atletico Madrid…Manchester United will have to fork out £14m to axe flop midfielder Bastian Schweinsteiger…Georginio Wijnaldum’s preference is to join Tottenham if he leaves Newcastle but the Magpies want more than £25m…Middlesbrough have agreed an £8m fee with Borussia Dortmund for Neven Subotic…Hull City manager Steve Bruce has warned Italian sides Fiorentina and Sampdoria away from striker Abel Hernandez…Eintracht Frankfurt want to take Manchester United youngster Guillermo Varela on loan…Arsenal boss Arsene Wenger has reportedly told forward Joel Campbell, 24, to look for a new club, with some interest from Spanish side Valencia…Nottingham Forest are one of 10 clubs hoping to sign Manchester United goalkeeper Sam Johnstone…

…Burnley are interested in Crystal Palace midfielder Lee Chung-yong…Stoke City have made enquiries about Everton midfielder James McCarthy…Leonardo Bonucci’s move to Manchester City could move closer with Mehdi Benatia joining Juventus…Hull are lining up a £6m bid for Cardiff keeper David Marshall…Southampton are to offer Dusan Tadic a new contract to keep him at the club…Bournemouth striker Tokelo Rantie is wanted by Leeds and he has refused to go on the Cherries’ pre-season tour…Liverpool striker Mario Balotelli, 25, could head to the Chinese Super League – if a deal is completed before the Chinese transfer window shuts on Friday…The Foxes have submitted a third and final £15m offer for Burnley defender Michael Keane.