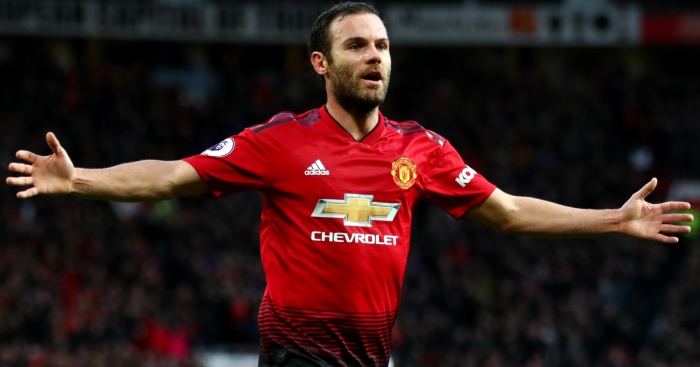 MATA MULLS OVER BARCA INTEREST…
Lovely Juan is a wanted man. Manchester United’s good egg can’t get himself in Ole Gunnar Solskjaer’s XI at the moment but his all-round loveliness has caught the attention of Barcelona. And, apparently, PSG and Juventus are also casting admiring glances in the 30-year-old’s direction.

Mata is out of contract at the end of the season and though talks are ongoing over a new deal, the former Spain international is considering some very attractive options.

Goal reckons Barca view Mata as a bargain, despite the size of his current wage packet. The playmaker pulls in £140,000 a week but given he wouldn’t cost a fee, the La Liga leaders reckon there’s value to be had.

SEVILLA IN MARTIAL AWE
Someone else in contract negotiations with United is Anthony Martial. Word is that that those talks are going rather swimmingly and that the France forward is close to putting pen to paper on fresh five-year terms.

But if Martial chooses to consider his options, then Sevilla are one of them. The Daily Mail reckons the Spanish club are keen to offer the 23-year-old a new start in Spain and they have intensified their pursuit after being custard-pied by Alvaro Morata.

Barca have been heavily linked with Ajax centre-back Matthijs de Ligt, who appears certain to leave Ajax this summer, but having blown £65million on his team-mate Frenkie De Jong, the Catalans may now be priced out of the market for £50million-rated De Ligt.

Which is where City come in. Pep Guardiola has also been keen on De Ligt and The Sun claims that if Barca are willing to take Otamendi off his hands then the City boss may turn his attention to the Ajax star, having been left disappointed by De Jong’s decision to move to Spain.

City, apparently, would want £35million for the 30-year-old. Which makes you wonder why Barca wouldn’t just scrimp together another £15million or so for De Ligt, a player 11 years Otamendi’s junior.

AND THE REST
Manchester United are keen to appoint Atletico Madrid sporting director Andrea Berta… Barcelona would prefer to sell Arsenal loan target Denis Suarez to Sevilla or Real Betis… Yeni Malatyaspor still want to sign Fulham forward Aboubakar Kamara despite his arrest for actual bodily harm… Carl Jenkinson has been told to fight for his place at Arsenal, despite interest from Burnley, West Brom and Ipswich… Liverpool and Roma have enquired about Brescia’s 18-year-old midfielder Sandro Tonali… RB Leipzig have made a final contract offer to Timo Werner.