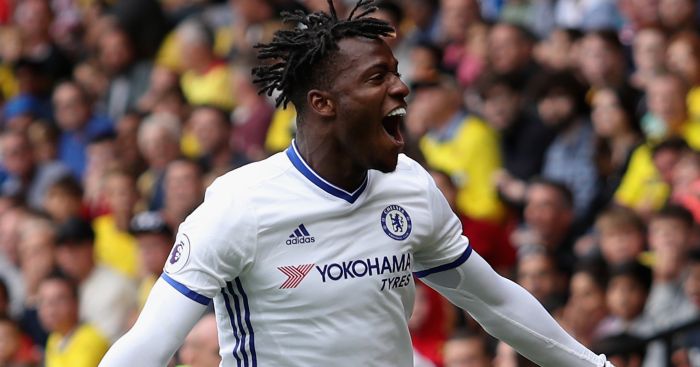 THE RACE IS ON FOR BATSHUAYI
A weird season for Michy Batshuayi. The Belgian striker can hardly be happy with his lack of minutes in the Premier League, and yet he did score the goal that won Chelsea the title and had plenty of time to establish a reputation as the king of social media.

What is clear is that Batshuayi is going to be targeted by plenty of suitors over this summer, keen to test Chelsea’s resolve to keep their striker and test whether the player wants to engineer a move to guarantee first-team football.

Monaco are one club mentioned as holding an interest, but so too are West Ham and Newcastle. Rather than a permanent move, both Premier League clubs are thought to be interested in a season-long loan deal. We bet they are.

YET MORE MANCHESTER UNITED RUMOURS
It’s about this time of year that we consider making an exhaustive list of the players linked with a move to Manchester United this summer, just to sit back in wonder at the end of August and count up the numbers. Let’s go back to Sunday to see Nemanja Matic, Fabinho, Paulo Dybala, Neymar, Kyle Walker, Semedo, Tiemoue Bakayoko and Pedro Neto touted for moves. Yesterday it was Bernardo Silva that was definitely joining.

By Tuesday, we have another collection of names. The Sun claim that United have been given hope of signing Renato Sanches and Douglas Costa from Bayern Munich because the pair had tough seasons. They didn’t finish sixth though? More importantly, do United really need two more attacking midfielders?

The Daily Star follow that up by saying that United are interested in signing Raphael Varane and Marquinhos, which takes us to 13 different players in three days. It’s going to be a long summer.

CHELSEA INTERESTED IN LANZINI
Poor West Ham. Every time one of their attacking players manages to combine form and fitness for a period of longer than six months, they are touted for moves to clubs where managers can organise a defence, the son of the owner doesn’t openly discuss transfer rumours on social media and the stadium feels like home.

And so to Manuel Lanzini, the star of West Ham’s season once Dimitri ‘The Snake’ Payet had left for Marseille. An exclusive in The Sun claims that Chelsea have made Lanzini a shock target, with Dan King writing that Michael Emenalo believes he can be on a par with Luka Modric. That’s an odd detail.

AND THE REST
Middlesbrough defender Ben Gibson could move to either Leicester City or West Brom… Bournemouth expect to complete the free transfer signing of Jermain Defoe this week… Ross Barkley is ready to leave Everton after failing to meet the club’s deadline for clarifying his future… Leicester want centre-back Harry Maguire on the cheap from relegated Hull… Chelsea will prioritise trying to sign Romelu Lukaku from Everton in the summer… David Moyes will have a say on Sunderland’s next manager following his resignation from the club.