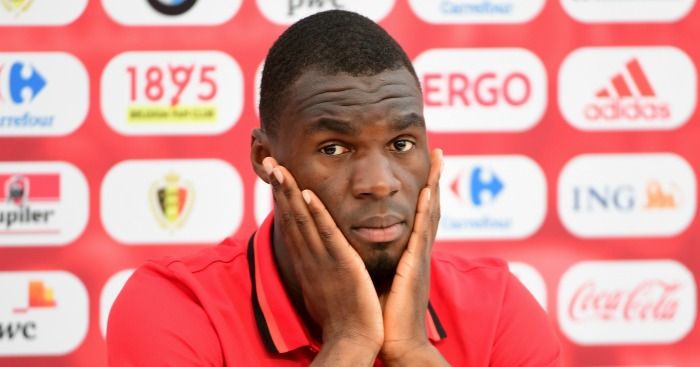 With Jurgen Klopp insisting that Liverpool won’t accept anything below market value for Benteke, the player’s agent is upping the ante on Liverpool by revealing that no bids have yet been made. The hint is clear: Drop your price.

“We are waiting for any news but at this moment there is nothing concrete,” Eris Kismet told the Guardian. “There are several teams interested in signing him so hopefully we can reach a resolution soon.”

This comes after Klopp’s comments at the weekend: “If there are clubs that want a striker from us they have to make real offers and are not hoping for anything else, otherwise we will find solutions.

“If there is a need on the other side then go for it – but not as a present. That’s how transfers are.

“A few clubs try to gamble but we are not part of the gambling side. We are serious people, and if there is an offer we will think about it.”

NOW TALKS OF A NEW DEAL FOR LUKAKU?
With Paul Pogba’s move to Manchester United looking to be tied up soon, Romelu Lukaku’s potential move to Chelsea is the only true saga left. The striker is clearly keen to leave Everton, but the club are understandably digging their heels in.

Yesterday, this fine column brought you the news via The Sun that Chelsea were prepared to offer Asmir Begovic and Loic Remy plus cash in a bid to persuade Everton to sell, but in the Daily Express Paul Joyce has other news.

Joyce is reliable on all things Merseyside, and writes exclusively that Everton will open new contract talks with Lukaku this week. That’s all very well, but in order to have talks you need both parties to agree. Is Lukaku really ready to sign a new deal, whatever the money offered?

SOUTHAMPTON TO BID FOR GABBIADINI
We’ll be honest, this one comes from largely spurious Italian website TuttoMercatoWeb, but their claim that Southampton are about to approach Napoli over a deal for Manolo Gabbiadini is an interesting one. We didn’t know he was still playing after all those goals for Sunderland and Derby.

While both Sadio Mane (Nathan Redmond) and Victor Wanyama (Pierre-Emile Höjbjerg) have been replaced by Claude Puel, Southampton are still looking for a replacement for Graziano Pelle. Shane Long, Charlie Austin and Jay Rodriguez are the sum total of Puel’s available forwards, so it is no surprise that they’re looking around for another option.

Napoli have lost Gonzalo Higuain during this transfer window, but have already moved to replace him with the signing of Arkadiusz Milik from Ajax. Gabbiadini only started four Serie A games for Napoli last season, so the 24-year-old may well be available for a price.

ALL THE BIG CLUBS WANT LOOKMAN
Screw developing your own, all the cool clubs are buying their youngsters from League One clubs and cutting out the middle man. Tottenham signed Dele Alli from Tottenham, Arsenal signed Rob Holding from Bolton and now everyone wants to sign Ademola Lookman from Charlton.

Ademola is still just 18, but played 24 times in the Championship for Charlton last season, scoring five league goals. Following the club’s relegation to League One, the Daily Mirror report that Arsenal, Tottenham, Liverpool and Southampton are all interested in signing him for a fee of £2m before the transfer window closes.

Warning: We have a problem whereby we keep singing the striker’s surname to the tune of ‘Whoops Now’ by Janet Jackson.

AND THE REST
Swansea are set to splash a club-record £15million to land Atletico Madrid striker Borja Baston… Roberto Mancini is set to leave his post at Inter Milan with Frank de Boer the favourite to replace the former Manchester City boss… West Ham will complete the £20million signing of Swansea forward Andre Ayew this week and are also closing in on Olympiakos left-back Arthur Masuaku… Tottenham defender Dominic Ball, 21, has emerged as a loan target for Championship duo Leeds United and QPR.