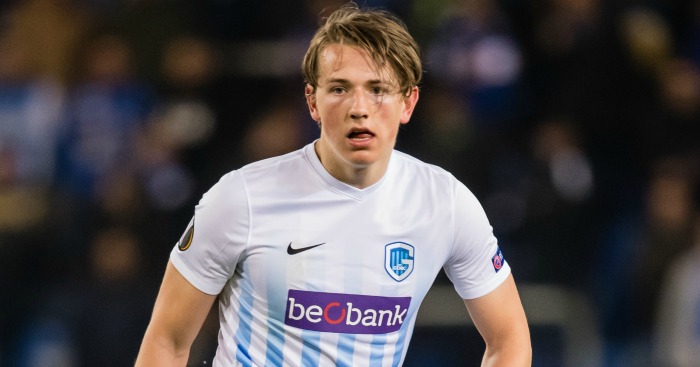 ARSENAL WANT BERGE
If there was one position for Arsenal to concentrate on this summer, would defensive midfield really be that area? No, it would not.

Still, with rumours of Alexandre Lacazette, Romelu Lukaku and Kylian Mbappe still drifting around the transfertmosphere, thoughts turn to another central midfielder. Mohamed Elneny, Aaron Ramsey, Granit Xhaka, Francis Coquelin, Santi Cazorla; where do you all fit in?

And where do you all fit in if Arsenal pay £18m for Genk midfielder Sander Berge, which is what The Sun say they will do. We’re told that Arsenal will face competition from Sevilla and Monaco, and that Berge is a whizkid.

The Sun’s report does contain the following paragraph: ‘The Frenchman, who has just signed a new two-year deal at the Emirates, has Francis Coquelin and Mohamed Elneny in the past couple of seasons.’

CHELSEA TO OFFER ALMOST £100M FOR PAIR
Most of the Chelsea news so far this summer has centred on the reported issues between the club’s hierarchy and Antonio Conte, with a power battle threatening to cause Conte’s departure. While that seems unlikely, it’s hardly ideal preparation for a combined Premier League and Champions League assault.

Still, the Guardian might have some good news for Chelsea supporters. They report that the club will offer £55m for Juventus’ Alex Sandro, and follow that up with a £40m bid for Monaco’s Tiemoue Bakayoko. They’re likely to get both players with those bids, too.

With Conte hugely frustrated by the lack of progress in the transfer market in the month since their season ended, Chelsea would be advised to submit both offers and get things moving. And then there’s Romelu Lukaku…

In truth, the story is a bit wishy-washy. The Croydon Advertiser sell it as ‘Crystal Palace could attract ex-AC Milan, Inter and Juventus boss Alberto Zaccheroni’, but the story is actually based on quotes on Zaccheroni himself, given to the Daily Star.

“For sure I would like it,” Zaccheroni said on the prospect of managing in England. “At my age, it is more appealing, an intriguing reality. The Premier League represents what Serie A represented when I was there from 1995 to 2010.”

So less Palace want him and more he wants the Premier League, with Palace and Southampton the only clubs without managers. We won’t hold our breath.

AND THE REST
Southampton are keen on Spurs’ Kevin Wimmer – but are not happy with the asking price… Stoke misfit Giannelli Imbula is on the verge of a return to France… Serie A side AC Milan could make a move for Manchester City’s 30-year-old keeper Joe Hart… Italy midfielder Marco Verratti, 24, wants to leave Paris St-Germain for Barcelona… Barcelona are to activate a buyback clause in Everton and Spain winger Gerard Deulofeu’s contract… Leicester City are set to confirm the appointment of Michael Appleton as Craig Shakespeare’s assistant.