Home All The News Gossip: Blues back for Llorente; Matic and Mahrez fears 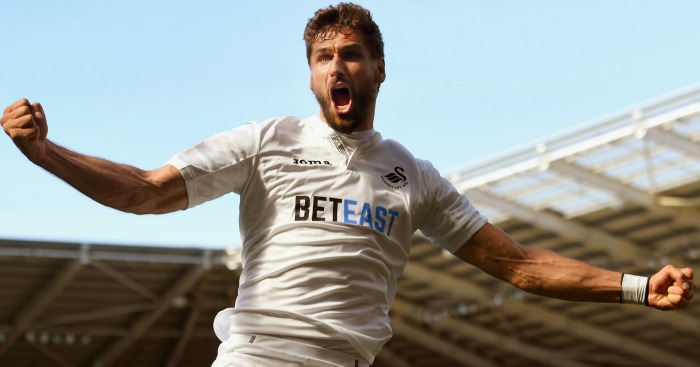 BLUES BACK FOR LLORENTE
Chelsea’s pursuit of Romelu Lukaku may be destined to fail, but Antonio Conte still wants Fernando Llorente regardless.

We say Conte wants him because rumours of late have suggested that Llorente is one of the figures that have caused disagreement between the Blues board and the coach. Conte is keen, the club less so.

Llorente, who is currently nursing a broken arm from a cycling accident on holiday, was wanted by Chelsea in January and had he got his way, he could have a Premier League winner’s medal. According to Standard Sport, Conte’s interest remains.

The 32-year-old is entering the final year of his contract in south Wales but Swansea are said to be keen to keep their former Spain centre-forward. Chelsea may have bought themselves some goodwill, however, having sent Tammy Abraham on loan to the Liberty Stadium for the season.

MATIC FEARS FOR UNITED MOVE
The Lukaku drama could have implications for another big hitter, with the Daily Star claiming Nemanja Matic now fears for his move to Man Utd.

United appear to have stolen Lukaku from underneath Chelsea’s nose, leaving Conte ‘perplexed’ according to this report. Matic is now concerned that the Blues could take their revenge on United by playing silly beggars over his move to Old Trafford, which was supposedly all but done.

Matic was supposedly waiting for Chelsea to sign Monaco midfielder Tiemoue Bakayoko before his his reunion with Jose Mourinho would be rubber-stamped, but the Serbian is worried the Blues will refuse to do business, or at least make the deal as difficult as possible.

Chelsea wouldn’t hold a grudge, would they?

THE DAILY MBAPPE
Real Madrid, rather sinisterly, have told Kylian Mbappe to ‘expect us’, according to a number of reports on Friday.

Mbappe has been heavily linked with real all summer, with the European champions leading the race for the French prodigy’s signature.

Real, though, are dragging their heels as they attempt to make room in their squad and on the payroll by shipping out some of their deadwood. However, Man Utd have supposedly walked away from negotiations over Alvaro Morata, and despite being linked with everyone under the sun, no one has yet taken a punt on James Rodriguez.

Mbappe has reportedly been promised that Real will come for him, but PSG aren’t wasting any time. The Ligue 1 side have reportedly offered Monaco £105million for the 18-year-old and are said to be willing to pay double the salary that Real will offer, whenever they get around to it.

MAHREZ MOVE NO CLOSER
Riyad Mahrez will return to pre-season training with Leicester today, despite expecting to be out of there by now.

The winger submitted a transfer request at the end of the season, citing an agreement he supposedly had with the Foxes fro last year, when he was promised he would be allowed to leave after another year’s service.

But Leicester are refusing to let the Algerian leave on the cheap, demanding £50million, but Arsenal are willing to pay only £35million, leaving Mahrez somewhat stranded.

How far is Mahrez willing to go to get his move? We are probably just weeks from finding out…

AND THE REST
Furious Antonio Conte’s Chelsea future is in doubt after the Blues’ summer transfer failings…Liverpool and Tottenham target Demarai Gray wants assurances from Leicester about his first-team prospects…Leicester are prepared to spend £25million on Manchester City striker Kelechi Iheanacho…Middlesbrough are to return with an improved offer for Cyrus Christie after Derby rejected their second bid…Aston Villa are set to win the race for Glenn Whelan after Derby ended their interest in the midfielder…Real Madrid have told Kylian Mbappe to ‘expect us’ as they tell him he will be signed after Alvaro Morata and James Rodriguez leave the club…Liverpool have suffered a blow in their pursuit of Naby Keita after Leipzig insisted they will not sell any “key players” this summer…Chelsea have not ruled out an Eden Hazard and James Rodriguez swap deal…Manchester United are considering a swoop for Borussia Dortmund star Julian Weigl…Leeds are plotting a swoop for Manchester United starlet Cameron Borthwick-Jackson.

Nemanja Matic fears his move to Manchester United could be off…Sir Alex Ferguson has told pals he would have signed John Terry on a free if he was still Manchester United boss…Sam Allardyce’s retirement plans could be put on hold following MLS interest…Hector Bellerin’s future will be resolved in a meeting with Arsenal boss Arsene Wenger…Manchester United could wait until the January transfer window to sign Benfica star Nelson Semedo…Arsenal striker Olivier Giroud has spoken to Ronald Koeman about a potential transfer to Everton…Riyad Mahrez is expected to start pre-season training with Leicester on Friday as Arsenal are unwilling to match his £50million price tag…Arsenal have not made an approach for Napoli midfielder Jorginho, according to his agent…Former Newcastle United winger Hatem Ben Arfa, 30, has been told he can leave Paris St-Germain…Stoke have been in talks to sign Manchester City midfielder Fabien Delph on a loan deal…Real Madrid have held secret talks with PSG midfielder Marco Verratti…Watford are in talks with Chelsea over midfielder Nathaniel Chalobah.