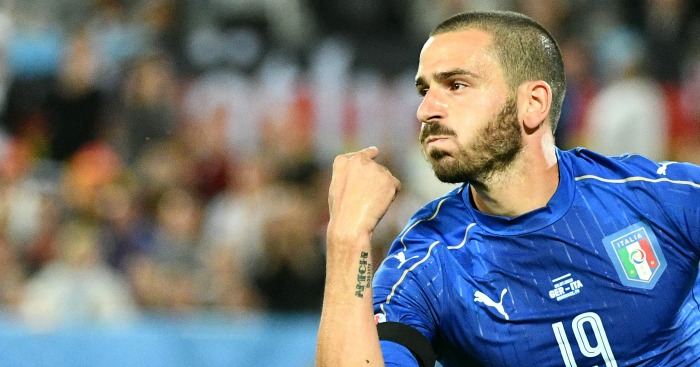 MANCHESTER UNITED MUSCLE IN ON BONUCCI
It’s a story in a few of Tuesday’s papers, so we can assume there is something in Manchester United’s reported interest in Juventus central defender Leonardo Bonucci.

The Daily Mirror claim that Bonucci is the experienced central defender Jose Mourinho wants to complete his back line, and that he will go up against Manchester City for his services. With City on John Stones’ trail, Chelsea might actually be the nearest competitor.

The whole move looks slightly speculative, in truth. With United desperate to get Paul Pogba’s move over the line, is it really wise to start targeting other Juventus players? And will Juve really contemplate selling United another key player?

LIVERPOOL MAKE SISSOKO MOVE
You have to hand it to Jurgen Klopp, whose fetish for collecting midfielders show no sign of abating. Even if they lose a few, Klopp must still fit Philippe Coutinho, Jordan Henderson, Marko Grujic, Emre Can, Lucas Leiva, Adam Lallana, James Milner, Divock Origi, Danny Ings, Georginio Wijnaldum, Sadio Mane, Roberto Firmino and Daniel Sturridge into six positions. And that’s assuming they sell all of Christian Benteke, Mario Balotelli, Lazar Markovic, Kevin Stewart and Luis Alberto and never want to play any of their youth prospects. They don’t even have European fixtures to blood them in.

Jurgen. Jurgen. JURGEN! Put that down. You know you don’t need another one. You’ve got three at home in your toybox that are still in the packaging.

MAN CITY WANT ANDRE AYEW
A slightly odd one now, courtesy of ESPN. They report that Pep Guardiola likes the look of Andre Ayew, and will challenge Napoli for his signature.

Ayes had a fine season at Swansea in 2015/16, one of the main reasons the club survived relegation, but would he really see first-team action at City?

It’s worth pointing out that the story is based in sources close to the player, which generally means his agent. This could be the case of an agent getting his client’s name out there and angling for a bigger move by name-dropping City.

AND THE REST
Manchester City are closing on the £20million transfer of Brazilian forward Gabriel Jesus despite rival interest from Manchester United…Everton are working on a deal to land Stoke City winger Marko Arnautovic as Ronald Koeman looks to find a solution to bolster his attack…Chelsea are set for a boost with Atletico Madrid on the verge of dropping their interest in Diego Costa…Premier League champions Leicester will hold crunch contract talks with Kasper Schmeichel, Danny Simpson, Danny Drinkwater, Jeffrey Schlupp and Riyad Mahrez ahead of the new season…West Ham are set to make a move for a new left-back after Aaron Cresswell was ruled out for up to four months…Arsenal defender Per Mertesacker could be out for up to five months after suffering a knee injury…Crystal Palace have joined Premier League new boys Burnley in the battle to sign Brighton midfielder Dale Stephens…Steve Bruce is considering whether to quit football after his shock departure from Hull…Chelsea have made a surprise move for Carlos Tevez, as their search for a new striker widened last night.