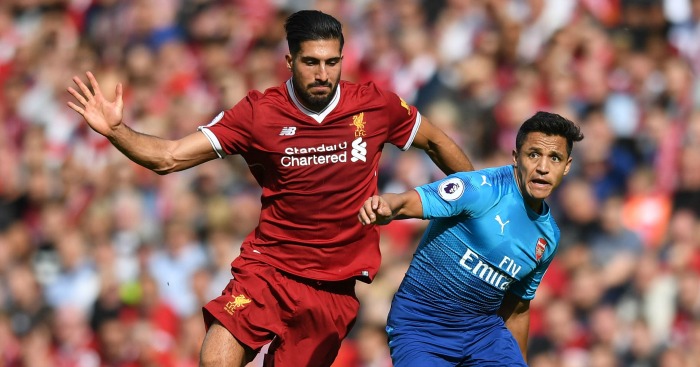 CAN HE JOIN MAN UNITED? YES HE CAN
Liverpool would much rather Emre Can joined just about anybody but Manchester United, but that could be a possibility according to Italian newspaper Tuttosport, who say that United and Chelsea are among four clubs interested in the Liverpool midfielder who is out of contract next summer. Juventus have long been linked with the German, but now the two Premier League clubs and Bayern Munich are also credited with an interest.

Can has enjoyed an excellent start to the season, winning over Liverpool fans in the 4-0 mauling of Arsenal. You can read some praise here in 16 Conclusions from that game.

The club be should doing absolutely everything in their power to ensure the best years of Emre Can's career are spent at Liverpool.

CONTE BANNED FROM BARKLEY TALKS
We are slowly learning what went wrong with Ross Barkley’s proposed move to Chelsea, with The Times claiming that the Everton midfielder went cold on the transfer because he was denied the chance to speak to manager Antonio Conte.

According to The Times, ‘Chelsea decided to keep the head coach away from transfer negotiations after his unsuccessful talks with Alex Oxlade-Chamberlain the same week, which ended with the Arsenal midfielder opting to join Liverpool. Barkley had asked to speak to Conte to seek clarification about the Italian’s plans for him after Everton accepted a £35 million bid from Chelsea last Thursday, but a call never materialised.’

Chelsea are expected to return for Barkley in January; presumably this time Conte will be allowed to talk to his target.

TOBY HAS SUITORS
It is hardly a surprise that one of the best centre-halves in the Premier League would attract interest, and the Telegraph claims that the latest demands from Toby Alderweireld’s agent for either more money or a transfer could lead to an exit next summer. It seems the Belgian will not sign a new contract unless he gets a significant pay rise from his current £50,000 a week.

According to these latest reports: ‘Talks over a new deal for Alderweireld have broken down in recent months, with Manchester City and Chelsea two of the clubs informed about the stalemate.’

AND THE REST
Manchester United will make another offer for Real Madrid’s Gareth Bale next summer as manager Jose Mourinho tries to sign a world-class winger (it’s a Daniel Cutts exclusive on The Sun website, hence we have largely ignored it)…Celtic manager Brendan Rodgers says the club would have broken their transfer record to recruit loan signing Patrick Roberts on a permanent deal, but Manchester City were unwilling to sell the 20-year-old forward for £30m…Everton winger Kevin Mirallas is “really sad” after the club denied him a move back to former side Olympiakos…are Leicester are unlikely to sign 34-year-old former Manchester City right-back Bacary Sagna.