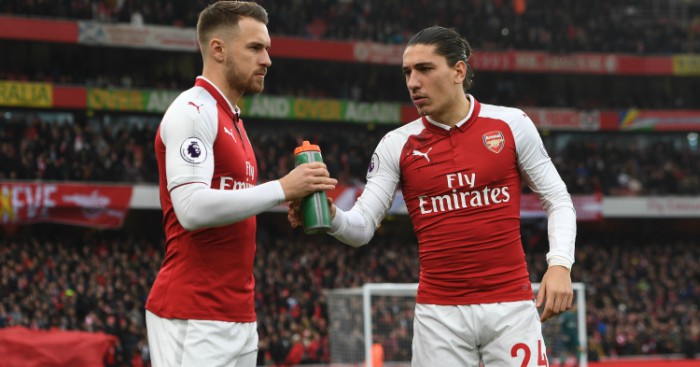 CHELSEA TO RAID ARSENAL AGAIN
Chelsea are sniffing around Arsenal again, with whoever is responsible for their recruitment eyeing up a move for Aaron Ramsey.

The Wales midfielder will have only a year left on his contract come the end of the season and he admits an agreement to extend his terms is nowhere near at the moment.

“I think they’ve been busy trying to tie up other contracts at the moment,” Ramsey said recently, and suitors are beginning to queue up to take advantage of Arsenal’s amazing relaxed approach to securing their assets.

According to The Mirror, Chelsea fancy a move for the 27-year-old, who has notched six goals and offered eight assists in 19 Premier League appearances. They claim they were ahead of the curve when it came to the Blues’ pursuit of Olivier Giroud, while Alex Oxlade-Chamberlain was also a target before he joined Liverpool instead.

Chelsea’s interest comes despite having signed three midfielders this season, with Ross Barkley in January joining summer recruits Tiemoue Bakayoko and Danny Drinkwater. Between them, they have managed three goals and two assists in 38 appearances.

UNITED SEEK BELLERIN UPDATE
One player Arsenal have pinned down is Hector Bellerin. That isn’t deterring Manchester United, though…

The Gunners persuaded Bellerin to commit to a new deal until 2023, despite interest from Man City and Barcelona.

Since then, Bellerin has struggled to reproduce the form that saw him recognised as one of the best right-backs in the world. But, according to the Manchester Evening News, United have still asked to be kept informed as a summer of upheaval at Arsenal approaches.

OLD LADY MAKING EYES AT MARTIAL
From Italy, we hear whispers of news that certainly won’t cheer up the Man Utd fan in your life…

According to Premium Sport, Juventus are lining up a move for Anthony Martial after their vice president Pavel Nedved was spotted with Nelio Lucas of Doyen Sports, the Frenchman’s representatives, in London last week.

Martial is apparently a ‘concrete objective’ of Juventus this summer, when the 22-year-old may be up for grabs for around £58million.

Selling Martial would certainly be enough to make some United fans lose their sh*t. Despite his permanently non-plussed demenour which so often makes you want to give him a shake, the France star is popular at Old Trafford, regardless of his struggles to hold down a place in Jose Mourinho’s XI. While the manager has spent the last few weeks trying to shoehorn Alexis Sanchez into his side, Martial has been shifted across the forward line and back, without any success for anyone.

AND THE REST
Chelsea face a battle to keep Eden Hazard after being knocked out of the Champions League… The Belgian could follow Thibaut Courtois and Antonio Conte in leaving the Blues this summer…Arsenal are keen on handing midfielder Mohamed Elneny a new deal…Barcelona believe Andres Iniesta will join a team in China at the end of the season…Real Betis believe Jack Wilshere encouraged their interest in him to use in contract negotiations with Arsenal.