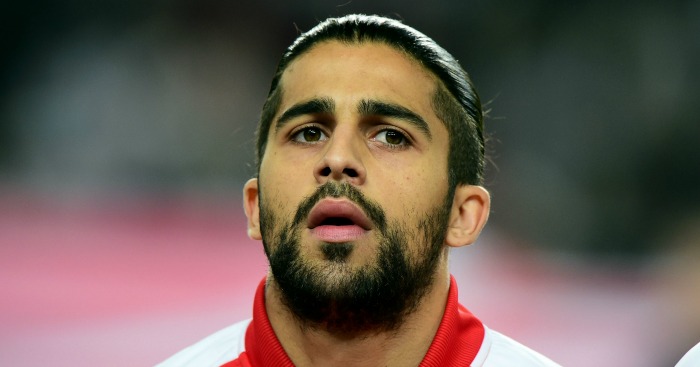 UNITED AND CHELSEA TARGET RODRIGUEZ
Manchester United and Chelsea are understood to be chasing Wolfsburg full-back Ricardo Rodriguez. Chelsea are weighing up a January swoop for the left-back (despite recently signing Marcos Alonso), according to TransferMarketWeb, with the Daily Star reporting that United ‘are apparently tracking him too’. Which is convenient.

The report claims the 24-year-old Swiss defender is open to a move away from the Bundesliga in January and Blues boss boss Antonio Conte is said to be willing to splash the cash in the new year. Rodriguez was thought to be on Conte’s radar this summer, but he signed Alonso from Fiorentina instead. Now though Rodriguez is believed to have come back into consideration with suggestions that Conte has been left unimpressed by Alonso’s performances. Which is odd as he was excellent against Leicester on Saturday.

Roma (linked with Manchester City full-backs Gael Clichy, Pablo Zabaleta and Bacary Sagna by The Sun online, by the way), Inter Milan and Atletico Madrid are also believed to be running the rule over Rodriguez, who has scored one goal in seven Bundesliga appearances this season.

UNITED MISS OUT ON URUGUAYAN TEEN
Manchester United made an approach for Boca Juniors midfielder Rodrigo Bentancur but were foiled because Juventus have a first-option deal with the Argentine club which was part of the deal that took Carlos Tevez back to his former club. Real Madrid and AC Milan were also interested in the 19-year-old, who made his debut two years ago and is now a first-team regular.

Boca president Daniel Angelici said: “I think it’s very good business for Boca. Juventus will pay £6.7million for 50 per cent of his rights. He must have something because there were a lot of clubs interested. Real Madrid made a proposal, Manchester [United] also came and Milan made a £12.5m formal offer to sign him.”

THE OX TARGETED BY SPANISH CLUBS
This is a bit left-field but El Gol Digital (nope, us neither) claim that both Valencia and Sevilla are interested in Alex Oxlade-Chamberlain, who enjoyed a rare start for Arsenal on Wednesday night against Ludgorets. He has not started a Premier League game since September 10 and has recently said that he may have to consider an exit from the Gunners, and this has got tongues wagging across Europe.

“I think his place is here. We like him. I personally rate him as a player and I hope that he will show that he can have a stable position in the team until the end of the season,” said Arsene Wenger on Tuesday.