Home All The News Gossip: Chelsea bid for Pulisic; he prefers Liverpool 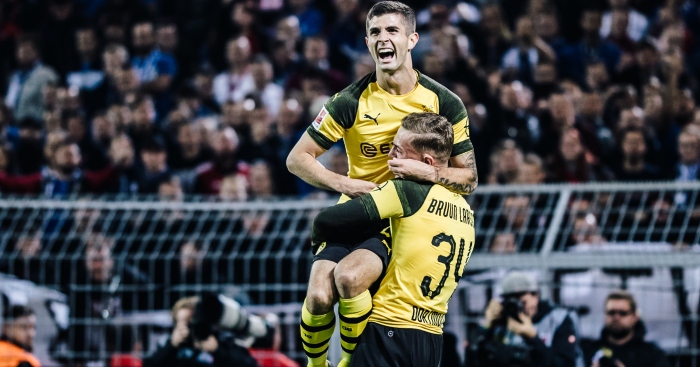 CHELSEA NOT PULISIC’S PREFERRED DESTINATION
Chelsea have been keen to position themselves at the front of the queue for Christian Pulisic (we wrote about him here), but it seems like any deal for the USA winger will be a complicated business.

According to the Evening Standard, the Blues made contact with Borussia Dortmund on Friday last week with an offer for the 20-year-old. Dortmund’s asking price is £70million and Chelsea’s offer is said to fall some way below that valuation but the Premier League club reckon there is room for negotiation given Pulisic has only 18 months remaining on his contract and is apparently unwilling to consider any renewal.

Chelsea’s hand is also strengthened by the fact that Dortmund want Thorgan Hazard to replace Pulisic. Eden’s brother was sold by Chelsea to Borussia Monchengladbach but the Blues retain the option of matching any offer Gladbach receive. If Dortmund want Hazard, then Chelsea can allow them a free run.

So far, so good. One problem: Pulisic would prefer to join Liverpool where, apparently, ‘he can be reunited with former Dortmund coach Jurgen Klopp’.

Pulisic joined Dortmund’s first team in January 2016, around six months after Klopp had left the club. But why let that get in the way of a nice story…

YOUR WEEKLY RABIOT
The future of Adrien Rabiot has been wildly speculated about on these pages. First it was Liverpool; then City; Barcelona then entered the fray; before PSG fancied their chances of convincing the France midfielder to recommit to a new contract.

PSG president Nasser Al-Khelaifi was said to have personally intervened in the hope of getting the 23-year-old to put pen to paper but, according to RMC Sport, it hasn’t worked. It seems Rabiot has decided to leave his home town to join Barcelona.

QUEUE FORMING FOR ENGLAND STAR
Ruben Loftus-Cheek can’t do much more to prove his worth to Chelsea but still he can’t get a start in the Premier League. You can understand it if the 22-year-old is feeling a bit miffed.

After scoring against Fulham at the weekend, the England midfielder admitted it was ‘tough’ to go from featuring regularly on loan at Palace last season and playing at the World Cup only then to return to the fringes of Maurizio Sarri’s squad.

The Mirror says ‘clubs are queuing up to take Loftus-Cheek on loan’. Palace are keen again, while Schalke retain a long-standing interest in the midfielder. Bournemouth, West Ham and Newcastle are also mentioned.