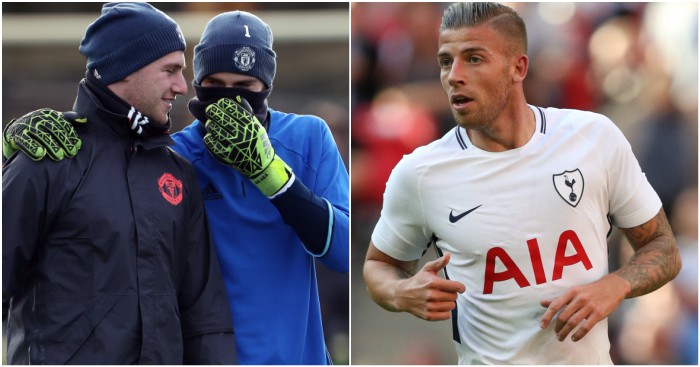 CHELSEA EYE ALDERWEIRELD SWOOP
Chelsea are determined to beat off all competition to sign Toby Alderweireld this summer.

That is The Mirror‘s claim, with doubts over the defender’s future at Spurs strengthening by the week.

Alderweireld has found himself in and out of Mauricio Pochettino’s team while speculation has intensified that he could be on the move this summer. The centre-half has a contract that includes a one-year extension to 2020, but it also contains a clause that could see him leave in 2019 for £25million – way below his market value.

So, Spurs could look to cash in this summer, with the latest report suggesting they are looking for £55million but may have to settle for £40million.

In which case, Chelsea are said to be extremely keen, though Man Utd and Barcelona are also sniffing.

Pochettino has already told Alderweireld that he won’t play the centre-back just to enhance his World Cup prospects.

Firstly, Sam Johnstone is a £4million target for West Ham after impressing during his loan move to Aston Villa. The Mirror claims David Moyes wants to sign the 25-year-old on a permanent deal following seven loan moves in six years for the former England Under-21 stopper.

That would also see Joe Hart packed off back to Manchester City. Where he goes from there is anyone’s guess.

Another United keeper who could be on the move is Dean Henderson. The current England Under-21 international has been on loan at Shrewsbury this term where he has caught the attention of Arsenal and Villa. The fact he is out of contract this summer makes him all the more appealing.

United are planning to make one final offer in a bid to retain Henderson on their books but, apparently, he’s made up his mind and he will leave the club he joined as a 14-year-old.

With the route to the first team seemingly blocked by David de Gea, Sergio Romero and Joel Pereira, you wouldn’t blame either for looking elsewhere.

AND THE REST
Manchester City boss Pep Guardiola thinks the club face a fight to keep England forward Raheem Sterling out of the clutches of Real Madrid… Manchester United boss Jose Mourinho is weighing up offers for Samuel Umtiti of Barcelona and Real Madrid’s Raphael Varane…Former AC Milan manager Sinisa Mihajlovic could be set for the Premier League – after interest from two clubs this season.Chelsea hope that a big European club, such as PSG, will offer Antonio Conte a job this summer as it would save them £9million in compensation…Arsenal fear Jack Wilshere will reject their offer of a new contract and leave on a free transfer in the summer…Bournemouth will demand £25m for Callum Wilson this summer, with Everton and West Ham both interested.