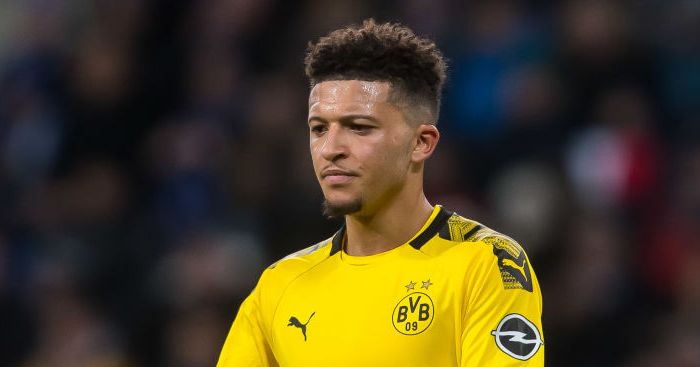 SANCH DRESSING
That ‘German source’ was chatting shiza. Liverpool are not the favourites to sign Jadon Sancho, scream the Sun on Sunday; Chelsea are.

And why are they the winger’s ‘most likely destination’ this summer? Because they are the only one of his suitors who ‘will meet Borussia Dortmund’s huge valuation of the England star’.

So despite interest from Liverpool and Manchester United – the latter having ‘spent the past year’ laying the groundwork to sign him – Chelsea will win the race simply by virtue of being willing to spend at least £100m.

Those demands ‘have put off Jurgen Klopp’s Reds’ but Chelsea will find £120m from somewhere, possibly even in a Christian Pulisic-esque deal which is secured in January with Sancho remaining on loan in Germany for the rest of the season.

ISSA TRAP
Jose Mourinho has always quite liked Issa Diop. So much so that it got him into some trouble with Paul Scholes when he was managing Manchester United. And he will rekindle that love at Tottenham.

West Ham would rather he didn’t, of course. And Sky Sports say that while Spurs ‘are interested in’ the centre-half, West Ham ‘do not want to sell’ and value him at more than £50m.

The defender is considered ‘a long-term replacement’ for Jan Vertonghen and Toby Alderweireld. He’s good, but he isn’t literally two centre-halves.

GERSON!
Tottenham also had BBC on over the weekend, with Flamengo midfielder Gerson catching their eye.

The 22-year-old only joined the Brazilian club in the summer, and played both the Club World Cup semi-final victory over Al-Hilal and final defeat to Liverpool. He was taken off after 90 minutes; the winner was scored in the 99th.

Which obviously means he’s brilliant. 90min say Spurs ‘have held talks’ about signing him, with the idea of having any deal ‘sorted before the January transfer window opens’.

Tottenham have ‘told Flamengo that they would even be willing to let Gerson stay in Brazil until the end of the Premier League season,’ because that is all the rage now. But as Mourinho ‘has given the move his blessing’, it is all systems go.

AND THE REST
Mikel Arteta agreed to become Arsenal head coach after failing to get assurances from Manchester City that he would be Pep Guardiola’s successor as manager at Etihad Stadium… Tottenham’s 27-year-old Denmark midfielder Christian Eriksen is set to turn down a move to Manchester United in January, despite being out of contract in the summer… Chelsea have agreed a deal to sign Norway Under-17 forward Bryan Fiabema from Tromso and the 16-year-old will go into the academy at Stamford Bridge… Arsenal, Borussia Dortmund and Bayern Munich are all interested in signing 32-year-old Belgium forward Dries Mertens from Napoli for £8.5m… Sheffield United want to sign Norwegian midfielder Emil Bohinen from Stabaek. The 20-year-old – who is the son of former Nottingham Forest, Derby and Blackburn midfielder Lars Bohinen – has also held talks with Leeds United… Manchester United, Everton and Southampton are among the clubs interested in signing Barcelona’s 19-year-old French defender Jean-Clair Todibo for £17m… AC Milan and Atletico Madrid want to sign Manchester United’s Serbia midfielder Nemanja Matic, 31… West Ham sent scouts to Qatar to watch Brazilian strikers Gabriel Barbosa, 23, and Bruno Henrique, 28, playing for Flamengo at the Club World Cup.