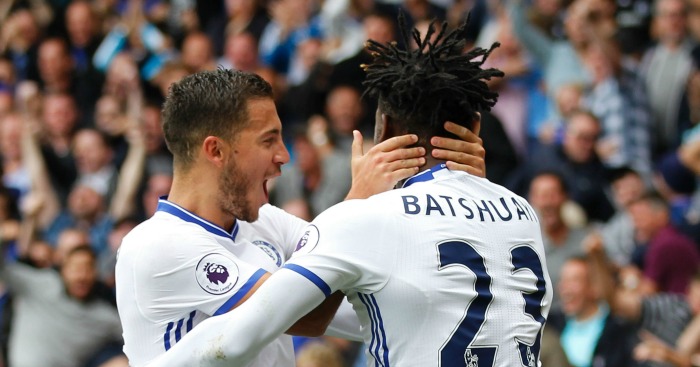 CHELSEA OFFER HAZARD TO JUVENTUS…
…but apparently they don’t want him because they have their sights set on Cesc Fabregas as the makeweight in a world-record defender transfer deal for Leonardo Bonucci. Two days after exclusively telling is that ‘JUVENTUS are ready to allow Leonard Bonucci to join Chelsea – but only for a deal involving Cesc Fabregas plus a record sum of money for a defender’, The Sun website’s new Italian man Alvise Cagnazzo is telling us – exclusively again – that ‘CHELSEA are stepping up their bid to sign Leonardo Bonucci – by preparing to offer Eden Hazard in exchange’.

That would of course make Bonucci a whole lot cheaper, but Cagnazzo claims that Juventus would rather get more money and Fabregas, who would easier fit into their 4-3-3 system as a deep-lying playmaker. It seems odd to us that Chelsea would resist selling Fabregas (not part of their usual starting XI) but would be happy to sell Hazard. We’re not sure we’re buying claims that Hazard has ‘failed to convince Conte of his reliability’.

AC MILAN WANT BATSHUAYI
We feel like we have already read this 427 times but here we go again…’AC MILAN are preparing an audacious January move for Chelsea striker Michy Batshuayi,’ according to The Sun website. Quite why it would be ‘audacious’ is anybody’s guess; is it because he has only just joined for £33m? Batshuayi is yet to start a Premier League game and seems unlikely to get past Diego Costa any time soon as his conversion statistics are spectacular.

AC Milan have a whole heap of new money and they are also being linked with Fabregas. The Sun add: ‘If Chelsea were to do business with Milan for Batshuayi, then the West Londoners would look to make a profit on their big summer investment.’

CHELSEA WANT FELIPE ANDERSON
The fact that this is credited to a ‘SPORTSMAIL REPORTER’ makes us think it might be hastily knocked-out nonsense but on the Monday of international week in October, we are not about to turn down gossip because it looks like hastily knocked-out nonsense. The Brazilian has long been linked with Manchester United but a switch to Kia Joorabchian as his agent means that he is now being linked with Chelsea. If he can get a contract for Alex Pato at Chelsea, then he can surely get a move for the Lazio winger.

AND THE REST
Bastian Schweinsteiger will almost certainly leave Manchester United in January, and is interested in a move to the United States or back to Germany, after getting himself fit with extra gym sessions…Chelsea and Manchester City both want Borussia Dortmund striker Pierre-Emerick Aubameyang, but the 27-year-old still favours a move to Real Madrid…Barcelona are interested in five defenders, including Arsenal right-back Hector Bellerin…Chelsea midfielder Nemanja Matic was photographed with his agent in Milan this week.