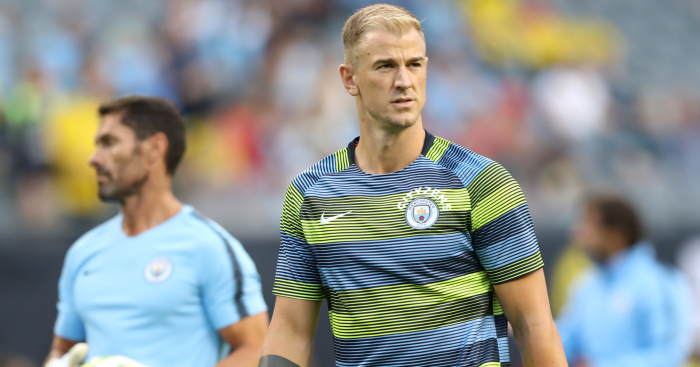 HART AND CABALLERO TO REUNITE AT CHELSEA
Pep Guardiola chucked Joe Hart the gloves for Man City’s friendly on Friday night and, encouragingly, he didn’t drop them. Still, Pep wants rid of the former England keeper and though interested clubs are hardly queueing up, Hart could be about to receive a very interesting offer…

The Sun claims Chelsea are considering a move for the 31-year-old who still has a year remaining on his deal at City. Chelsea are on the hunt for a new keeper before they let Thibaut Courtois move to Real Madrid and Hart is said to be among a number of names Maurizio Sarri is considering.

Apparently, Hart is seen as “a good option due to his small price tag — and because he boosts their count of homegrown players”. On that basis, perhaps Dave Beasant fancies a return to Stamford Bridge?

Kasper Schmeichel, Petr Cech and Gianluigi Donnarumma have all been linked with Chelsea in recent days, and perhaps signing both Hart and Donnarumma might make some sense. But starting the season with Hart and Caballero, the same goalkeeping duo Guardiola wanted shot of after arriving at City, would absolutely not.

REAL ARE TRIPPING
Real Madrid have already spent £31million on a right-back this summer but the signing of Alvaro Odriozola from Real Sociedad apparently hasn’t damped their enthusiasm for Kieran Trippier.

The Tottenham star caught the eye at the World Cup and Spurs are apparently braced for big-money bids for the 27-year-old. The Sun reckons one might come from the Champions League winners, with “sources close to the player have spoken openly about the England defender being aware of Real’s interest”.

With Dani Carvalhal and now Odriozola available to Julen Lopetegui, it sounds like bollocks to us. Even The Sun admits it’s a stretch, especially since they need all the money to replace Cristiano Ronaldo.

AND THE REST
Barcelona have made a third bid in excess of £55m for Willian…Real Madrid are preparing an opening £112m offer for Eden Hazard…Mauro Icardi is back on Real’s radar.Everton have made a £22m bid for Barcelona defender Lucas Digne…West Ham and Newcastle are in talks with Atlanta United and Paraguay midfielder Miguel Almiron…West Brom winger James McLean is on the verge of joining Stoke…Thierry Henry is a candidate if Aston Villa’s new Egyptian owners opt to replace Steve Bruce…Aston Villa midfielder Jack Grealish is edging closer to Tottenham…Roma have made a £31.3m offer for Malcom…Fulham look set to sign Spanish keeper Fabri from Besiktas and Aleksandar Mitrovic from Newcastle…Newcastle will then make a £16.5m offer for West Brom’s Salomon Rondon…Chelsea will move for Miralem Pjanic after registering their interest in Juventus team-mates Gonzalo Higuain and Daniele Rugani.